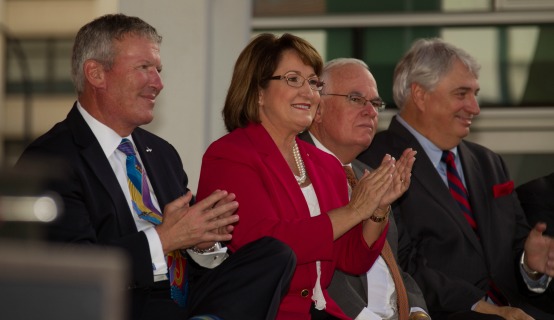 The historic grand opening marks yet another milestone for Central Florida in the continued transformation of Orange County into a world-class destination for the arts, recreation and culture.

“I was overjoyed to celebrate this historic grand opening of the new Dr. Phillips Center with our citizens,” Mayor Jacobs said during her remarks. “The greatest gift we can bestow upon future generations is opportunity. The Dr. Phillips Center will do just that, with arts education and amazing cultural experiences.”

The new state-of-the-art facility will be a Mecca for creativity and discovery. Where artists, audiences and students will gather to experience, learn and explore the performing arts, fulfilling the vision of the Dr. Phillips Center, Arts for Every Life.

In 2013, the Orange County Board of County Commissioners approved a $94.5 million venues package that allows the use of the Tourist Development Tax to fund various community performing arts, sports and recreation and tourism venues. The Dr. Phillips Center is a public-private collaboration with the City of Orlando, Orange County, the State of Florida and generous donors.

On November 15 at 8:30 p.m., there will also be a one-time performance of Broadway & Beyond at the grand premier of the Walt Disney Theater. Directed by acclaimed director and producer Richard Jay-Alexander with musical direction by Broadway’s Mary-Mitchel Campbell, Broadway & Beyond is an exception show that featured luminaries from Broadway, and beyond, including international music and dance performers.

A collection of photos from the ribbon cutting ceremony can be found on Flickr for use by the media.