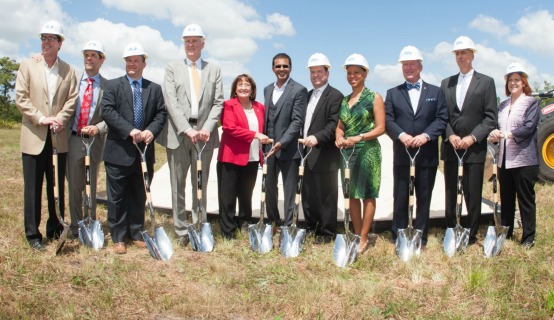 The new state-of-the-art facility in east Orange County will be home to the USTA’s Community Tennis and Player Development divisions, which will create jobs and attract new investments in Central Florida.

“Establishing the nation’s top tennis training facility in Central Florida is a great win for our community and will add enormously to our reputation as a sports destination,” Mayor Jacobs said. “Equally important is the synergy that will result from this project. Not only will USTA work closely with Lake Nona’s Medical City biotech hub, we fully expect to attract industries that are related to sports and wellness, including research and development focused on athletic performance and new products.”

The 100-plus court tennis center is scheduled for completion in late 2016. The campus will be accessible to youth and recreational players as well as collegiate and professional tour-level athletes. A consortium of regional and economic development agencies partnered with the Tavistock Group on the headquarters relocation.

“As a region we are committed to world-class sports, recreation and culture, and now we add tennis to that list,” Mayor Jacobs said. “From tournaments to training, we’ll have a front-row seat as future tennis stars are born right here in Central Florida. As we strive to raise generations of healthy Floridians, there could not be a better example than USTA and their athletes.”

Moving the Player Development division national headquarters from Boca Raton to Orlando will provide great regional opportunities for the next generation of American tennis champions. The facility will host tennis events ranging from 10-and-under team tennis to national championships.

“This is a historic day as the USTA continues to reimagine its future, and redefines how we deliver on our mission of promoting and developing tennis in the United States,” Katrina Adams, USTA chairman of the board and president, said. “By housing our two divisions devoted to growing the game at all levels, and training the next generation of players and coaches, we can have a greater impact on the sport than we ever had before.”

Joining Mayor Jacobs at the event were Rasesh Thakkar and Thad Seymour with Tavistock Group and Lake Nona, City of Orlando Mayor Buddy Dyer, as well as representatives from Visit Orlando, the University of Central Florida, the state of Florida and the USTA partners and athletes.

“Lake Nona is the ideal place for the USTA to grow and thrive,” said Rasesh Thakkar, senior managing director of Tavistock Group. “We have a long history in sports, and together with the USTA, we will continue to attract innovators to Lake Nona to create opportunities that will advance sports science and athletic performance.”

A collection of photos documenting the USTA facility groundbreaking
are available for use by the media and are located on Flickr.