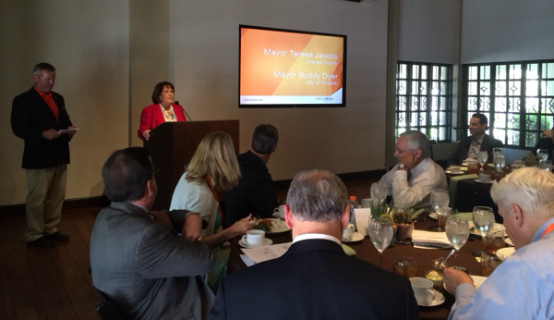 Along with a delegation of Central Florida’s elected officials and community leaders, Orange County Mayor Teresa Jacobs recently traveled to Phoenix, Arizona, for an Orlando Economic Development Commission (EDC) mission trip focused on that city’s best practices and innovative approaches to regionalism, with the goal of helping further economic development to occur here.

“As a region, it’s so important that we have a shared vision of how innovation can alter the fabric of a community, and of the positive impact it can have on our citizens, entrepreneurs and high-tech sectors,” Mayor Jacobs said. “The economic development mission to Phoenix was energizing and informative, and we thoroughly enjoyed meeting so many engaged leaders.”

The 2015 Leadership Experience focused on best practices used in Phoenix and innovative approaches to regionalism that may help further economic development in Central Florida.

The three-day trip with 80 delegates centered on the theme of next-generation innovation and the new regionalism. The delegation learned how technology giant Intel has developed the area of advanced manufacturing in Arizona and details of Greater Phoenix’s regional strategic plan. Arizona State University (ASU) President Michael Crow also shared his insight into ASU’s campus expansion in downtown Phoenix.

“The Leadership Experience was a tremendous opportunity for us to learn, as a group of community leaders, about the Phoenix market and how they are positioning themselves for a more prosperous economic future,” Orange County Economic Development Administrator Eric Ushkowitz said. “There were many great takeaways that are directly related to initiatives already happening in the Central Florida region.”

Mayor Jacobs joined the EDC’s trip to Austin, Texas, in 2012, which paved the way to a major initiative for the region. The region’s branding campaign, “Orlando. You don’t know the half of it.” grew out of learning how Austin’s leadership developed an effective brand that transformed their economy.

Mayor Jacobs then hosted Orange County’s Branding Summit in October 2012 and announced that the EDC would lead the new initiative through a regional branding committee consisting of local business leaders familiar with the region’s economy.

Mayor Jacobs is a board member of the EDC, which serves a four-county area and the City of Orlando to attract, retain and grow jobs for the region.