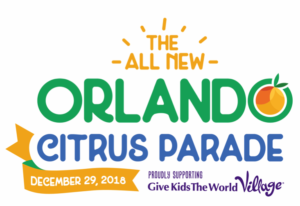 As it makes its way through downtown Orlando, the parade will air live from 10 a.m. to noon in the Orlando market on WFTV, the ABC affiliate for Central Florida and the news and information leader. It will also be streamed live on WFTV Now. Emmy Award-winning WFTV News Anchor Jorge Estevez and TV Host, Model and Miss Florida USA 2010 Megan Clementi are the parade co-hosts. American Idol finalist and singer Justin Guarini is the parade’s special correspondent and actor Billy Flanigan is the Street Host. The parade will also air nationally as a one-hour syndicated show, “Sunshine State Citrus Celebration,” for the months of January and February.

The Orlando Citrus Parade has grown to become one of the largest sports affiliated parades in the nation, an annual tradition that occurs each year between the Camping World Bowl and the Citrus Bowl.

This year’s parade will support Give Kids The World Village – an 84-acre, nonprofit “storybook” resort in Central Florida. At the Village, children with critical illnesses and their families are treated to weeklong, cost-free vacations.

The parade is being produced by Parades R Us in association with JM Best Entertainment. Executive producers are John M. Best, Pamela Bolling, Michael Chapman and Jeff Revels. Producers are Sarah Griffith and Angela Bowles.

For anyone interested in becoming a parade day volunteer, or volunteering for the float build from December 26 through December 28, the website has detailed descriptions of volunteer opportunities, such as balloon handlers (16 years of age and older), banner carriers, cast operations, float escorts, talent escorts, and many more.