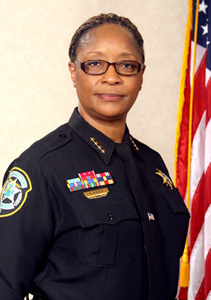 Chief of Corrections Cornita A. Riley has dedicated more than 14 years of service to the County
and remains a leader for social change and excellence in public safety in our community.

In March, Chief Riley was recognized by her hometown as one of “St. Petersburg’s First Ladies in African American History” by the Dr. Carter G. Woodson African American Museum Board of Directors. As the first female African-American Chief of Orange County Corrections, she is a role model for women in our region and has made great strides in improving the quality of life for all Orange County residents.

“With no thoughts of a career in law enforcement or corrections, I never imagined my life journey would lead me to become a successful corrections executive,” said Chief Riley, who has 32 years experience in public safety. “Over the past years, I have been committed to serving my community, mentoring others, and doing all I can to make a positive difference.”

Chief Riley’s career with in the criminal justice system began at the Florida Department of Corrections in 1981 when she took on the role of probation and parole officer after graduating from Florida State University with her Bachelors in Rehabilitation Counseling.

While at the state, she held the position of Assistant Superintendent and then, Regional Assistant Warden. In 1999, she joined Orange County Corrections as the manager of the Special Facilities and the Inmate Services Division. Rising through the ranks, she received multiple promotions and was later promoted to Deputy Chief of Operational Services, where she served for five years prior to her appointment as the Chief of Corrections by Mayor Teresa Jacobs.

“The numbers show there has been an increase in women working in higher ranks, but there is still much to be done considering this is still a male dominated environment,” Chief Riley said. “I encourage women working in corrections to follow their career path and continue to pursue their aspirations to become leaders in the field.”

Chief Riley oversees the third largest jail in Florida and is responsible for more than 1,800 corrections officers and staff, 3,100 inmates and more than 6,000 persons in community corrections programs. The jail’s operating budget is $152 million.

“Chief Riley is a person of deep character and values and those virtues permeate both her personal and professional life. She can make tough decisions but always in a way that is thoughtful and fair,” Linda Akins Weinberg, Deputy County Administrator for Orange County Government. “She is a ‘leader’ in every sense of the word—leading by example, by encouragement and by accountability. It is certainly fitting that she has received this honor.”

Since her appointment in October 2013, Riley has implemented an 18-month strategic plan that focuses on public safety and outcome measures, including superior jail, probation, program management and operations.

Chief Riley is leading Corrections through a culture of change and her inspirational leadership is a testament to her commitment to public safety and the community that we serve. Orange County salutes the contributions of Chief Riley and proudly recognizes all of her extraordinary achievements.