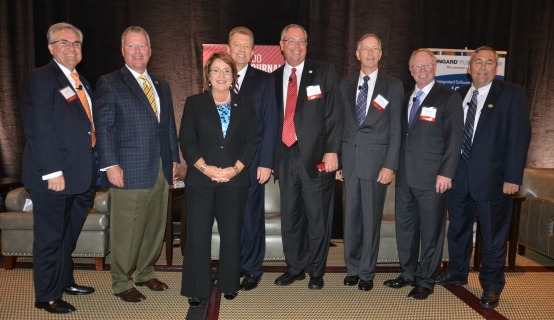 Mayor Jacobs proudly announced that Orange County’s unemployment rate is the lowest it’s been in years, standing at 5.9 percent as of March 2014. Additionally, she highlighted the region’s record breaking 59 million guests who visited the region last year. As Vice Chair of the Central Florida Commuter Rail System Mayor Jacobs also touched on the growing popularity of SunRail and future plans and funding for Phase 2.

“The station at Sand Lake Road is what I would call a gateway station,” Mayor Jacobs said. “This station will provide connectivity to the Airport and the Orange County Convention Center, both of which play a significant role in our economic development efforts.”

“Central Florida is the epicenter globally for Modeling, Simulation and Training. Right here, our own Team Orlando and Department of Defense procurement offices deliver billions in economic development for Florida,” said Mayor Jacobs.

The Army, Navy, Marines and Air Force are at the core of our simulation and training industry, contributing nearly $5 billion to Florida’s gross state product and nearly 30,000 high-tech jobs, with salaries averaging $70,000 per year. When combined, with indirect and induced jobs, the industry employs more than 60,000 citizens that call our region home.

Other big projects in Orange County include continued development of the Dr. Phillips Center for the Performing Arts and the reopening of the Florida Citrus Bowl later this year.

Photos from the Orlando Business Journal’s Meet the Mayors Luncheon are available for use by the media and are located on Flickr.