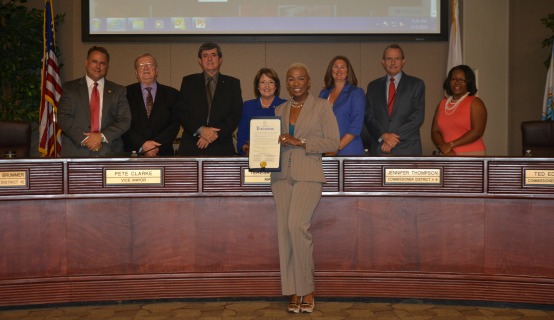 Orange County Mayor Teresa Jacobs and the Veterans Advisory Council remembered and saluted the brave men and women who have made the ultimate sacrifice while serving in our Armed Forces during the annual Orange County War Memorial Commemoration Ceremony.

“On this Memorial Day, as armed conflicts continue in many places throughout the world, we memorialize the courage, valor and honor of America’s heroes. To all those lost in the pursuit of freedom, we are deeply grateful for your sacrifice,” said Mayor Jacobs, who called for a moment of silence to honor the fallen. “The bravery and sacrifice of our Orange County men and women are memorialized on our War Memorial so that their lives will be remembered and cherished for eternity.”

In years past, the names of armed services members fallen in battle from Orange County have been unveiled during this event.

“Since taking office in 2010, I’ve overseen the addition of too many names to this Memorial,” Mayor Jacobs said during the ceremony.

This year no new names were added to the Memorial as no service members from Orange County lost their lives in active duty last year. Instead, Mayor Jacobs was joined by Colonel Edwin R. Marrero, U.S. Army (Ret.) in the laying of a commemorative wreath at the end of the ceremony.

During the ceremony, Mayor Jacobs cited the impressive record of service held by two World War II veterans in attendance, including 100 year-old Captain Robert Roberts, who served in the U.S. Navy from 1937 to 1964.

“From combat to reconnaissance missions, if it has wings, he’s flown it,” Mayor Jacobs said during her remarks.

Mayor Jacobs also recognized 92 year-old Command Sargent Major Harry Shakes, who served in the U.S Army from 1943 to 1976 and served in WWII, Korea, Vietnam and the First Wave of the Invasion of Normandy at Omaha Beach.

Photos of the ceremony are available for use by the media on Flickr.