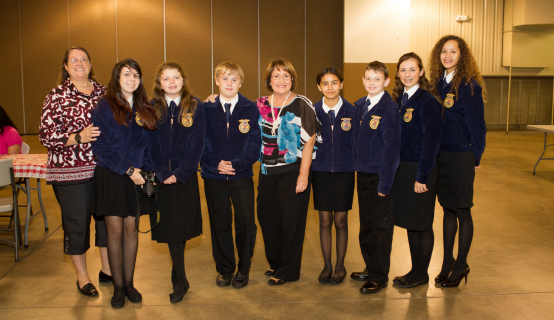 The keynote speaker at the event, Mayor Teresa Jacobs, spoke about the need for better access to fresh fruit and vegetables among the poor and boosting community health through local “farm to table” initiatives.

“As the Sunshine State’s largest general agricultural organization, the Orange County Farm Bureau is doing a terrific job in upholding Florida’s reputation as a national leader in the agriculture and farming sector,” Mayor Jacobs said.

“Mayor Teresa Jacobs has actively participated in the annual dinner since she was elected Commissioner of District 1,” said Bobby Beagles, the local Farm Bureau’s executive director. “We greatly appreciate the mayor’s dedication to agriculture in Orange County.”

The Orange County Farm Bureau is part of Florida’s largest general agricultural organization, the Florida Farm Bureau Federation (FFBF), which promotes and protects the agricultural interests of farmers and ranchers engaged in production agriculture. This year, the FFBF celebrates 72 years of service in agriculture with about 147,000 members in 60 counties in the Sunshine State. That legacy continues through Orange County Public Schools’ active and thriving Young Farmer and Rancher Program.

“I especially enjoyed spending some time with students from our Young Farmer and Rancher Program, because they are so passionate about our community and maintaining Florida’s abundant supply of agricultural resources,” Mayor Jacobs said.

“This is really exciting for us because it gives the students the opportunity to see how agriculture impacts our area,” Hamilton said. “They really look up to the people in this room so it’s like a dream come true for them.”

A collection of photos from the Orange County Farm Bureau’s Annual Dinner are available on Flickr for use by the media.