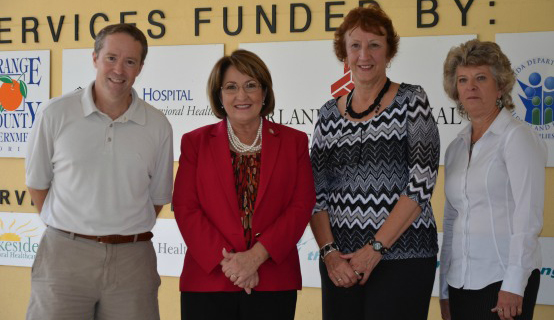 “The regional benefits of our CRC are far reaching. By diverting citizens in crisis to the CRC, we save local hospitals and our jails millions of dollars,” Mayor Jacobs said. “In terms of public safety, the resources and precious time of law enforcement are diverted back to where they are most needed.”

The facility provides necessary resources and care for patients suffering from mental health or substance abuse crisis, while offering intensive case management for those who have been diagnosed with mental illness and substance abuse disorders. The facility also administers transitional housing for the chronically homeless.

“I am very impressed with the CRC and it is a model that I would like to institutionalize in Minnesota,” Senator Goodwin said. “Orange County should be proud of being first in the nation to develop comprehensive, humane, cost-effective, wrap-around services that prevent the mentally ill from going to jail. The cooperation of all the groups involved, along with the support of Mayor Jacobs, is vitally important to helping people live more successful lives in our communities.”

Senator Goodwin works diligently to improve the mental health services provided to citizens in Minnesota on the legislative level, and has previously served as the principal planning analyst of Hennepin County’s Children’s Mental Health Collaborative. She is currently working to develop a similar model of the CRC in Minnesota based on the knowledge and best practices she learned in Orange County, such as the public and private partnerships, which were essential to creating the center and are key to serving our mentally ill population.

Judge Quam, who has presided over the Hennepin County’s Mental Health Court for the past three years, has been at the forefront of the criminal justice system advocating for better care of mental illness in our nation. He has testified before the U.S. Senate on this topic and cited the Orange County CRC as a model for the nation.

“Orange County’s Central Receiving Center is a model for how communities around the country can coordinate their resources to meet the needs of those with mental illness,” Judge Quam said. “What is most impressive is how the CRC immediately assesses the clients and matches them with the care and treatment they need, and then ensures that the clients continue to be paired with the resources they need to succeed in the long run. The CRC proves that with great leadership and community partners working together, it is possible to help many people with mental illness stay out of jail and become productive members of society.”

Through collaborative community efforts, the CRC functions in partnership with local hospitals and law enforcement as a recommendation of Orange County’s Jail Oversight Commission. Over the past decade, the CRC’s concept of crisis intervention has grown and evolved into a recognized best practice for the State of Florida.

“I am thankful to Mayor Teresa Jacobs and the Board of County Commissioners for continuing to recognize the importance of mental health in our community,” said Donna Wyche, Division Manager of Mental Health and Homeless Issues for Orange County Health Services. “Without this support we would not have the opportunities to meet and share our community efforts and experiences with folks around the country like Senator Goodwin and Judge Quam.”

Photos from Senator Goodwin and Judge Quam’s visit to the Belvin Perry, Jr. Central Receiving Center can be found on Flickr for use by the media.