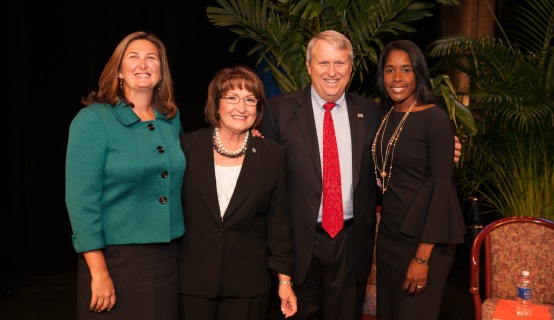 The Oath of Office ceremony was held for the second terms of Orange County Mayor Teresa Jacobs and District 4 Commissioner Jennifer Thompson; additionally District 2 Commissioner Bryan Nelson and District 6 Commissioner Victoria P. Siplin were sworn in for their first terms at the Orange County Convention Center on Tuesday morning. The ceremony, held at the Linda W. Chapin Theater, was attended by more than 400 citizens and televised live by Orange TV.

“From SunRail to our brand-new Dr. Phillips Center for the Performing Arts, from our Citrus Bowl to our new MLS Soccer Stadium, we are the envy of the world,” Mayor Jacobs said during her remarks at the ceremony. “Less than a month ago, Orlando was named by Forbes magazine as the top city for job growth in the entire country … with 3.7 percent growth so far in 2014, which is more than twice the national average.”

In special recognition of renewed citizen participation and engagement, Girl Scout Troop 967 led the Pledge of Allegiance at the ceremony. Troop 967 mailed a letter to Mayor Jacobs in late 2012 explaining the need for a new traffic signal. Their request prompted county officials to study the intersection near the school. After a traffic study was conducted, which included a review of traffic counts and crash data at the intersection, County officials found the study justified the need and recommended that a new traffic signal should be installed near the school’s intersection.

In describing priorities for her next term, Mayor Jacobs reiterated her continued commitment to citizen engagement, domestic violence issues, youth mental health, a renewed focus on homelessness solutions, sustainability, a third acoustic hall for the Dr. Phillips Center, and a “dazzling” International Drive hospitality and entertainment district for guests and visitors from around the world.

“From a clean and abundant water supply to recreation amenities and transportation infrastructure that supports a world-class quality of life, Orange County is committed to being the best place in which to live, work and play,” Mayor Jacobs said.

“I have enjoyed my eight years in the Legislature but look forward to coming home and tackling the problems and creating the opportunities right here in my back yard,” Nelson said. “We must start with safe neighborhoods, high performing schools and the opportunity for good jobs to truly have a community that we want to work, live and play in.”

Commissioner Siplin, who was sworn in by Rev. Dr. Randolph Bracy, Jr., will serve District 6, which includes Pine Hills, Parramore, MetroWest and the International Drive Corridor. The seat was previously held by Tiffany Moore Russell, who was elected Orange County’s Clerk of Court on Nov. 4, 2014.

“I am honored to serve and accept the responsibilities of this position,” Siplin said. “As I reflect on my past, I realize that my resume is different from most. I am a Haitian-American who grew up as an orphan with no choice but to work hard in order to survive. I have overcome many challenges and now to become a county commissioner, it lets us all know that dreams can come true.”

“This is about each and every person that has the faith and confidence in those of us who have the calling to serve,” Commissioner Thompson said at the end of her remarks. “At the end of the day this is about people in this community that believe being involved in local government can make a difference.”

Fred Kittinger, Associate Vice President of University Relations at the University of Central Florida, served as the ceremony’s emcee. The talented Evans High School Trojans Choir sang the national anthem, as well as pre-ceremony hymns. The Invocation was provided by Rev. Ana Velez from Christ Hispanic United Methodist Church, and the Presentation of Colors was offered by Orange County Fire Rescue Honor Guard.

A collection of photos from the Oath of Office are available on Flickr for use by the media.