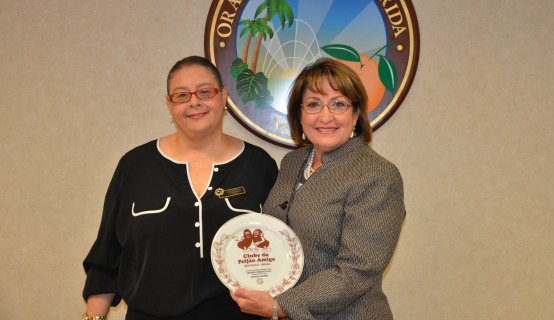 FENACTUR represents more than 1,000 travel agencies in Brazil and was founded to serve its members and market the tourism industry both domestically and internationally. Brazil is one of Central Florida’s top international visitor countries, with approximately 770,000 guests visiting from the region in 2013.

“Orange County Government is committed to connecting the global tourism marketplace with our region’s thriving hospitality, business and trade sectors,” Orange County Mayor Teresa Jacobs said. “We have an incredibly strong relationship with Brazil – already one of our top international tourism partners, and we are focused on strengthening and growing that cultural and economic connection.”

Laiz Rodrigues, president of the Central Florida Brazilian American Chamber of Commerce, presented the award to Mayor Jacobs to recognize the importance of the relationship between Orange County and Brazil.

“We are thankful for Mayor Jacobs’ efforts to improve and strengthen the tourism industry in Orange County for the Brazilian community,” Rodrigues said. “She has always been a champion for international trade and economic development between our region and Brazil.”

According to the U.S. National Travel and Tourism Office, Brazil was one of the top 20 tourist generating countries in the United States in 2014. Visitation from the country jumped by almost 10 percent last year and it now sends more visitors to the U.S. than Germany, France and India.

Visit Orlando is also a key partner in promoting our international tourism industry. By providing an expanded focus on Brazil and with representation in the country to strengthen partnerships with tour operators, airlines, advertising, public relations and promotions initiatives, Visit Orlando has enhanced and encouraged the growth of Brazilian tourism in Orange County.