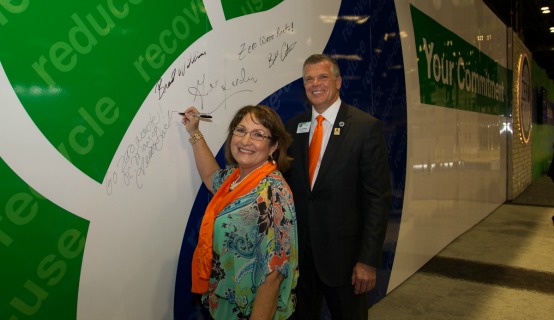 Orange County Mayor Teresa Jacobs welcomed more than 65,800 delegates from around the world this week to the Orange County Convention Center (OCCC) for the plastics industry’s largest global convention.

With an economic impact of $129.6 million, NPE2015: The International Plastics Showcase brings thousands of professionals from 120 countries to Central Florida to preview the latest in plastics technology, innovation and equipment during the triennial week-long event.

“We are so proud to welcome NPE and the plastics industry back to Orange County,” Mayor Jacobs said during the opening ceremony. “This is the most important plastics trade show in the world and we are so fortunate to host it right here at our Center of Hospitality, the Orange County Convention Center.”

Long held in Chicago, the Showcase relocated to Orlando in 2012 and is produced every three years by SPI: The Plastics Industry Trade Association. The show draws recyclers, manufacturing technology experts and international and U.S. executives who make major manufacturing purchasing decisions that impact the world’s economy.

“Every sector of the plastics manufacturing industry is represented at this world-class event that attracts professionals across industries challenged with producing products we use in our everyday lives,” said William R. Carteaux, SPI president and CEO.

Mayor Jacobs was a guest of honor for the 2015 Plastics Industries Hall of Fame Induction held the night before the Showcase’s opening ceremony. Carteaux and 10 other leaders in the plastics industry were inducted into the Hall of Fame, which is located at the University of Massachusetts at Lowell.

Mayor Jacobs issued a proclamation at the opening ceremonies for the Showcase declaring March 22 through March 28 as NPE2015 Week in Orange County. SPI: The Plastics Industry Trade Association represents nearly 900,000 American workers and is the third largest manufacturing industry in the United States.

A collection of photos from the 2015 Plastics Industries Hall of Fame Induction and the opening of the NPE2015: The International Plastics Showcase is available for use by the media and are located on Flickr.