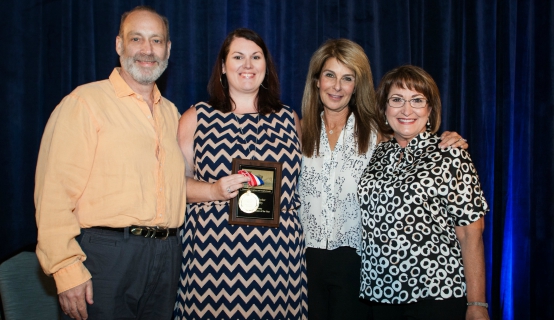 Pawsitive Shelter Photography founders Paul Wean, Joan Wean and Barbara Sheridan were honored with the Mayor’s 2015 Distinguished Citizen of the Year award by Mayor Jacobs. Many other Orange County citizens, community associations and groups were also recognized for their outstanding community contributions at the Neighborhood Preservation & Revitalization Division’s annual workshop event, which helps citizens learn about the many resources that can benefit their neighborhoods.

“Orange County and Animal Services are thankful for all that Paul Wean, Joan Wean, Barbara Sheridan and Pawsitive Photography have done for the shelter,” said Mayor Jacobs. “Paul has dedicated so much time and effort to improving the photos of the shelter pets. From purchasing seasonal backdrops and decorations to teaching our community how to take better pet portraits, Paul really has put much of his time into helping the homeless pets in our community.”

Pawsitive Shelter Photography produces vibrant photos that showcase the personalities of shelter pets that are ready for adoption and companionship. For the past four years, the team has dedicated their time twice a week at Orange County Animal Services. The photos shared on the web and through social media helped citizens identify their missing companions quickly online as well as helped secure new, loving homes for many pets.

Additionally, Orange County’s six Board of County Commissioners recognized a citizen in their district as Citizen of the Year:

District 1 – Noted as one of the greatest players in men’s golf history, Arnold Palmer is a businessman and golf course designer. He is also a well-known philanthropist, using his fame and resources to enrich the lives of others through Orlando’s Arnold Palmer Hospital for Children and the Winnie Palmer Hospital for Women & Babies. The award was accepted by Scott Wellington.

District 2 – Crystal Brunton is an executive and advisory board member for The Lovely Project, a nonprofit organization that has empowered thousands of girls by providing them with education and peer-mentorship to pursue a purposeful and productive life. She is also active in the beautification committee for the People of Lockhart Community Association, actively serves as member of Northwest Church and is a Florida State Representative for International Justice Mission, which helps bring awareness to human rights and human trafficking.

District 3 – Wanda Ramos has helped with cleanup projects, applied for neighborhood grants and started the conversation about the widening of a roadway in her district. She has successfully created a volunteer organization and participated in Orange County programs. Her neighborhood, Valencia Gardens, has received grant funding to replace their old signs and spruce up their old wall.

District 4 – Todd Campbell, president of a volunteer community association, brings residents together through community meetings as well as being host of large festivals. He volunteers his time to affect change and pours countless hours into the community because he loves his neighborhood and wants to make it a great place to live, work and play.

District 5 – Not only does Richard John “R.J.” Mueller participate on his Homeowners Association board and volunteer for the Coalition for the Homeless, he also runs marathons and triathlons. When he isn’t running in various competitions, he is representing his East Orange community as an advisory committee member for MetroPlan Orlando’s Bicycle and Pedestrian Safety Committee. He is actively working on reducing traffic and congestion issues by working on solutions with other community members. He is also involved with his church and his family, including his three children and seven grandchildren.

District 6 – Orlando native Thomas “Doc” Dorsey founded the Orlando Minority Youth Golf Association in 1991 to introduce the game to inner-city and minority youth. The organization has taught more than 2,000 children about golf, discipline, respect, honesty, work ethic and golf etiquette. His dedication earned him induction into the National Black Golf Hall of Fame and many other prestigious awards. He has changed the lives of children, not just by using his own funds to help, but by being a role model and father figure.

There were also winners in seven other community award categories at the 2015 Community Conference:

“I’ve always thought of the community conference as our county-wide family reunion,” said Orange County Neighborhood Preservation and Revitalization Division Manager Lavon Williams. “It’s a wonderful time when we all get to gather and celebrate our accomplishments and encourage one another to keep going in the journey of making our neighborhoods the best ever. I’m so honored to celebrate 20 years.”

Now in its 20th year, the 2015 Community Conference, hosted by Orange County’s Neighborhood Preservation and Revitalization Division, was held this year at the DoubleTree Orlando Downtown. The annual conference provides valuable information about County services and programs that can help neighborhoods thrive and prosper. It also connects neighborhood leaders and hardworking citizens who want to make an impact by improving their communities. Workshop topics included information on neighborhood grant opportunities, code enforcement and defeating blight.

A collection of photos from the 2015 Community Conference is available for use by the media and are located on Flickr.