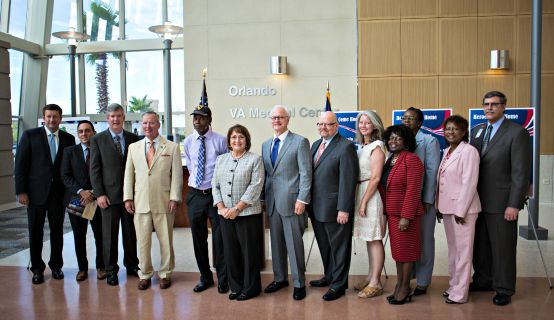 The Veterans Surge, held the week of July 20, strives to end veteran homelessness by the end of 2015. CFCH is working in collaboration with the local, state and federal Veterans Affairs (VA) agencies, the nonprofit Homeless Services Network (HSN), faith organizations, community leaders and other nonprofits agencies.

Across Orange, Osceola and Seminole counties, 418 homeless veterans were located by volunteers who collectively dedicated more than 2,000 hours to the outreach. The Surge was the first step of the “Heroes Come Home” initiative, which includes locating homeless veterans, housing and assisting them. The 418 men and women are now registered with the U.S. Department of Veterans Affairs, which will streamline the process for providing them with the homes and aid necessary for their stability, in partnership with local agencies, including United Way’s “Mission United” initiative.

The Orange County Veterans Services Office continues to work with all veterans, dependents and survivors to ensure that they receive all the benefits they earned, including medical care, vocational training, compensation for service-related injury and illness, referrals and financial assistance.

This year alone, the VA and Department of Housing and Urban Development will spend nearly $13.5 million on housing homeless veterans in the Orange, Osceola and Seminole counties, according to the VA and CFCH. Since 2010, when the White House announced the goal of ending veteran homelessness, Central Florida has worked diligently to house hundreds of Central Florida’s homeless veterans and their families.

The “Heroes Come Home” initiative continues the region-wide effort to end veterans homelessness in 2015. Answering President’s Obama’s mandate to get every veteran living on the streets into housing, the collaborative plan will ensure that this goal is met in Central Florida by the end of the year.

For decades, Orange County has been the leading provider of homeless services, budgeting more than $5 million annually. Earlier this year, Orange County committed another $2 million to that annual amount, and partnered with the Homeless Services Network, the City of Orlando and others to help attract new federal grants to house the chronically homeless.