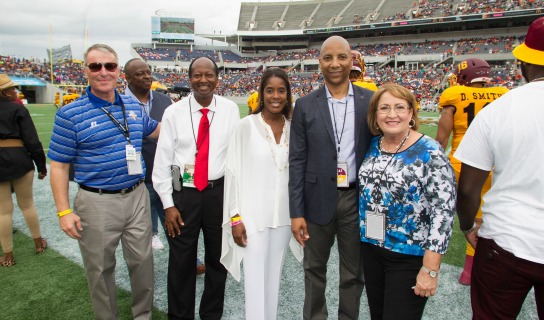 Orange County and Central Floridians proudly welcomed thousands of roaring fans back to the Orlando Citrus Bowl for the annual Florida Classic in November with Mayor Teresa Jacobs participating in the exciting coin toss at the beginning of the game.

The Citrus Bowl hosted the nation’s largest HBCU rivalry between the Florida A&M University Rattlers and the Bethune-Cookman University Wildcats for the 70th time and the 36th time as part of the Florida Classic. The score ended with BCU taking the game 35 to 14, continuing its winning streak for the fifth year over FAMU.

“I was thrilled to watch some of the nation’s best college athletes compete in such an exciting football game with our citizens and visitors at our world-class stadium, the Orlando Citrus Bowl,” Mayor Jacobs said. “Congratulations to the Bethune-Cookman University Wildcats for their win, and to FAMU for a great game!”

The Orange County Board of County Commissioners supports the Florida Classic and awarded the Florida Classic Consortium with $137,500 this year to help fund scholarships for Florida A&M University and Bethune-Cookman University. The consortium receives the funds annually and consists of several members from both institutions including the presidents and athletics directors.

Greg Creese, the Communications Director for Florida Citrus Sports, spoke of the importance of the game to Orlando, and why it remains a highly anticipated annual event for Central Florida.

“The Florida Classic is more than a football game, it’s an experience,” Creese said. “Few games in the country feature a halftime performance that rivals the in-game action, but few fans leave their seats at halftime. It’s a great cultural experience and has brought years of economic impact to Central Florida.”

The Orlando Citrus Bowl recently reopened in 2014 as part of a $94.5 million venues package to transform Orange County into a mecca of economic, cultural, and sports opportunities to support the region’s increasingly diverse and creative population for generations to come.

The new Citrus Bowl was constructed in less than 10 months and replaced 90 percent of the stadium with brand new construction, creating an improved fan experience and utilizing the latest technology in the region’s largest stadium venue. There are now 65,000 seats available for fans and three, large state-of-the-art video scoreboard displays.

At the reopening of the stadium, Mayor Jacobs announced that the Rebels and Seminoles would open the 2016 season at the Citrus Bowl as part of the first annual “Orlando Kickoff Game.” The neutral-site season opening game between Florida State University and The University of Mississippi will be played on Labor Day, Monday, Sept. 5, 2016, and will be televised nationally by ESPN.

The stadium has welcomed families from all over the world and has created unforgettable experiences for many local residents and visitors from around the world.