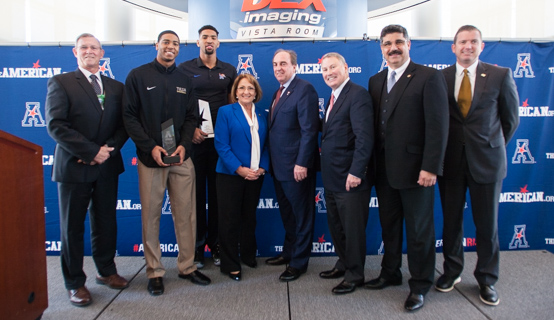 “On behalf of Orange County, congratulations to all of these star student athletes and coaches,” Mayor Jacobs said at the awards ceremony. “This is a perfect example of the type of event we want to host. Together with our entire host committee and local partners, we are ready for a fantastic season of basketball in Orange County.”

The 2016 American Men’s Basketball Championship was held March 10 – 13 at the Amway Center where the University of Central Florida’s Men’s Basketball played in the first round against Tulane. The four-day event is expected to generate approximately 5,000 room nights and more than $5 million of economic impact in Orange County.

Mayor Jacobs co-chaired the Local Organizing Committee for the event with City of Orlando Mayor Buddy Dyer to help raise awareness and garner enthusiasm to help fill the arena by promoting the championship event.

“The Amway Center, in additional to our other community venues, plays a vital role in driving economic development to our region,” Mayor Jacobs said.

To view photos of the awards ceremony and press conference, visit Flickr.