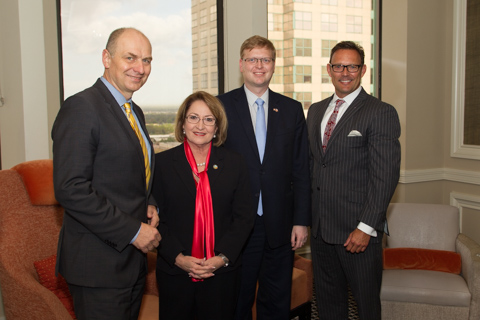 Several community leaders from Central Florida and Mayor Jacobs met with the delegation to discuss trade opportunities, investment interests and cultural ties between the Czech Republic and Orange County.

“As the No. 1 region in the nation for job growth in 2015, it is important to expand our business relationships, especially with our international economic partners in the Czech Republic,” Mayor Jacobs said.

According to a study published earlier this year, there are currently approximately 43,000 Czech citizens residing in Florida. Most have interests in investments, real estate and start-up companies in the fashion, aviation, hospitality and construction sectors.

“The business leaders selected to come on this trip are at the top of their field,” Inochovsky said. “They feel that the Orlando region has a lot to offer and are looking to create partnerships and potentially start their businesses right here in Orange County.”

During their time in Central Florida, the delegation visited the Albin Polasek Museum and Sculpture Gardens; the National Center for Simulation; the Nanoscience Center; and the University of Central Florida’s Advanced Materials Processing and Analysis Center and the College of Optics and Photonics. The Winter Park-based Polasek Museum includes a beautiful collection of art and is the former lakeside home of the famous Czech sculpture Albin Polasek, who died in 1965. He is heralded as one of America’s foremost sculptors of the 20th century.

CFITO was launched as a pilot program in 2014 in response to local companies looking for international exporting opportunities. The Office also helps streamline the process for foreign investors to connect and partner with regional businesses and establish local operations. CFITO is funded by Orange County with a dollar-per-dollar match from JP Morgan Chase and is located at the National Entrepreneur Center (NEC).

Photos from the recent Czech Republic delegation visit may be found on Flickr for use by the media.