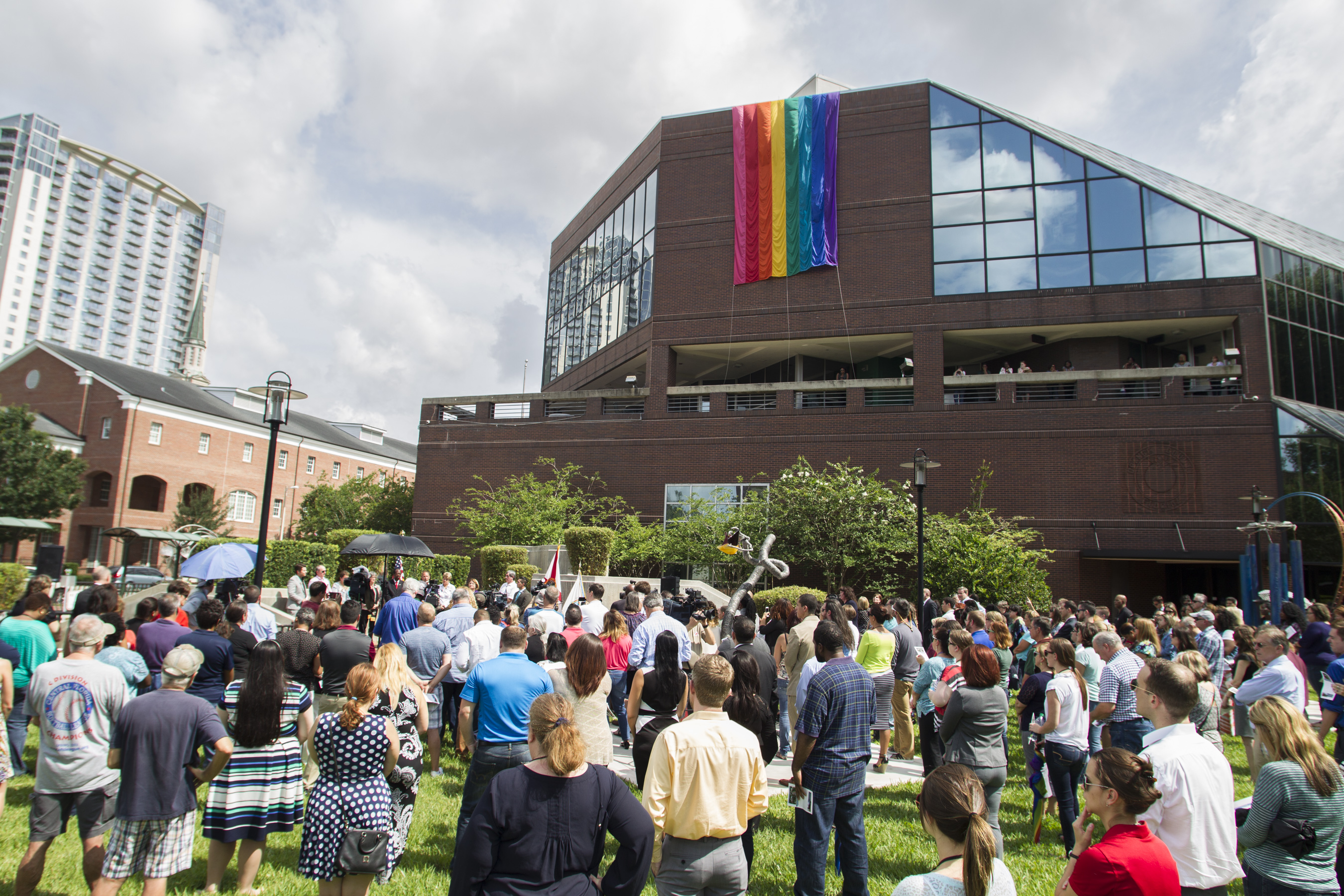 [Above] Orange County employees, citizens and community leaders gathered on the lawn of the Orange County Government Administration Center for the Sea-to-Sea Rainbow Flag Commemorative Ceremony.

In tribute to the lives lost at the tragic Pulse nightclub shooting and in support of freedom worldwide, Section 93 of the Sea-to-Sea Rainbow Flag was proudly displayed at the Orange County Government Administration Center on June 16 and 17, 2016.

On the morning of June 17, Orange County Mayor Teresa Jacobs held a commemorative ceremony to honor the victims of the Pulse nightclub tragedy and to celebrate what the flag symbolizes. Jorge Estevez, news anchor at WFTV Channel 9, read the names of all 49 victims to honor their lives.

“Today, we are deeply honored to welcome Section 93 of the Sea-to-Sea Rainbow Flag,” said Mayor Jacobs. “I want it to be a part of our history– to look where we are today and look how far we have come.”

The Sea-to-Sea Flag has become a globally-recognized symbol of the LGBTQ movement and symbolizes acceptance, understanding, education, solidarity and inclusion.

Section 93 represents a 25-foot section of the world’s largest 1.25-mile original eight-color LGBTQ rainbow flag that was constructed in 2003 in Key West, Florida. The original rainbow flag was designed by San Francisco artist Gilbert Baker in 1978, as a symbol of gay and lesbian pride in response to anti-gay activities.

In the spring of 2003, Baker and a team of volunteers cut and sewed a 1.25-mile-long version of the flag in Key West, to celebrate the iconic banner’s 25th anniversary. On June 15, 2003, approximately 2,000 volunteers unfurled the flag from the Atlantic Ocean to the Gulf of Mexico along the entire length of Duval Street, in a sea-to-sea representation of pride and diversity. Section 93 has since traveled worldwide.

“Section 93 of the Rainbow 25 flag is here to bring hope, solidarity, pride and unite this community together in a time of healing,” Ebenhoch said at the ceremony.

Many flags are seen and flown in cities and communities around the world; however Section 93, one of the 250 sections of the flag, has an important history. It has represented the LGBTQ community in more locations globally than any other, including being displayed at the Winter Olympics, at the Supreme Court for the Obergefell hearings and at pride celebrations in cities across the U.S. and Europe for more than 12 years. In February 2016, it was proudly carried by the United States and French Ambassadors to Australia in the largest LGBTQ celebratory parade in the world.

Section 93 has been touched, felt and seen by millions and was given its name “The Sacred Cloth” during the landmark United States Supreme Court case Obergefell v. Hodges, which gave same-sex couples the right to marry.