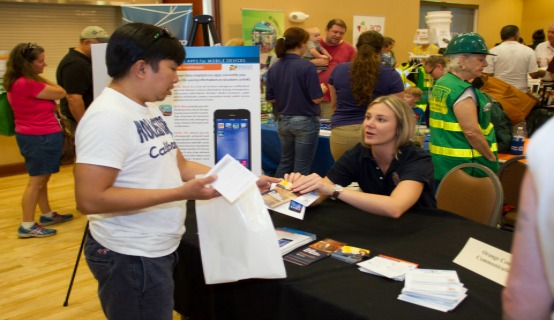 More than 1,500 citizens learned how to prepare for hurricane season and received free storm supplies at Orange County’s 2016 Hurricane Expo in June. “Review, Reboot, Be Ready!” was the theme of this year’s expo, which was held at the Renaissance Senior Center.

“Just because we haven’t had a major hurricane in more than a decade, we don’t want residents to get hurricane amnesia about what to do to prepare,” Orange County Office of Emergency Management (OEM) Manager Ron Plummer said. “We stressed the importance of having a plan and being prepared.”

Orange County District 4 Commissioner Jennifer Thompson welcomed citizens to the expo and spoke about the importance of hurricane safety.

During the event, several Orange County offices and partner agencies educated citizens on how best to protect their homes from the potentially devastating effects of unexpected storms and severe weather. WFTV Channel 9 Meteorologist Tom Terry met with citizens and shared information on weather conditions before and during a storm.

It is vital that citizens put together a detailed safety plan for their families and pets to prepare for the season.

The forecast for the 2016 season predicts four to eight hurricanes and 10 to 16 named storms. The Atlantic Hurricane Season began June 1 and ends November 30.

Citizens can also register for the OC Alert system, which sends emergency alerts, notifications and life-saving instructions via text message to cell phones and email accounts.

To view photos from the 2016 Hurricane Expo, visit Flickr.