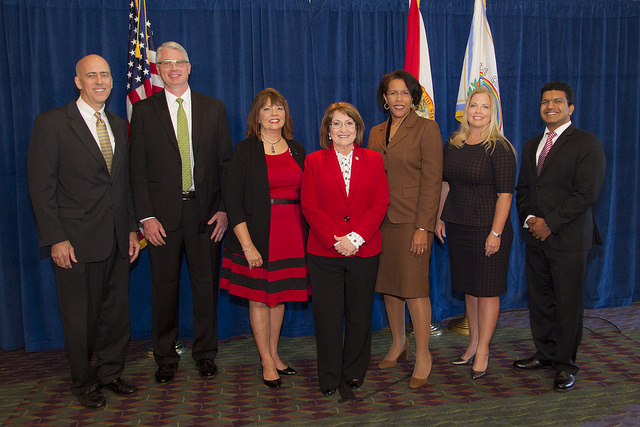 Orange County Mayor Teresa Jacobs welcomed a capacity crowd of more than 600 citizens to the 2017 Economic Summit at the Orange County Convention Center on Wednesday, Jan. 18.

Now in its fifth year, the Economic Summit is hosted annually by Mayor Jacobs and provides a barometer on growing business sectors and regional economic successes. The highly anticipated annual local and state economic forecast, issued by nationally renowned economist Sean Snaith, Ph.D., director of the University of Central Florida’s (UCF) Institute for Economic Competitiveness, is the central highlight of the event. Snaith said there is “much to smile about” regarding Orange County’s economy.

The Summit’s panel of notable workforce experts also offered their perspective on how local certification programs can open doors to a multitude of opportunities for those seeking job training and technical skills outside the traditional four-year degree.

“In Central Florida, there’s growth in all sectors. The pace of growth, compared to the state wide averages, is much stronger,” Snaith said during his presentation. “We’re growing faster than the state, than the national economy and not by a little bit, but by a great amount.”

The region’s robust economy, remarkable connectivity and transportation enhancements, in addition to the region’s diverse and talented workforce, continues to aid Orange County’s upward trajectory of economic growth and progress.

“When you look at everything that’s happening in Central Florida, it’s clear that we are outpacing virtually every other region in the country. From job creation to infrastructure – including the fact that we’re about to double the size of our international airport, and we’ll still have room for growth – we are living in extraordinary times,” Mayor Jacobs said during the Summit. “We’re in the middle of a transformation on Interstate 4, as the historic I-4 Ultimate project continues to be very successfully managed by FDOT. And think about how quickly SunRail has become part of our lives. We’re not just adding infrastructure, we’re changing how we live, work and play today, as well as creating opportunities for how our children can live tomorrow.”

Vernet Lasrado, Ph.D., assistant director for research at the University of Central Florida, provided insight and a presentation on the region’s extraordinary talent supply, which has attracted high-profile business expansions to Orange County this past year. Examples include VOXX International Corp., a leading manufacturer and distributor of automotive, consumer accessories and premium audio products, extended warranties provider SquareTrade, human resource and payroll software developer ADP and CVS Health’s Caremark — which will add thousands of jobs in Orange County over the next couple of years.

The Summit also featured a Workforce Development panel discussion focused on continued job growth and economic successes in Central Florida for the upcoming year. The panel was moderated by Pam Nabors, president and CEO of CareerSource Central Florida.

“Workforce, hands down, is the most important factor of economic development,” Sircy said. “CEOs repeatedly tell us that workforce development and the talent pool today, and in the future, is vital to their success.”

Sircy added that businesses are attracted to a diverse workforce and a ready talent pipeline.

“I’m especially intrigued to hear about the exploding need for certificate-level workers,” Mayor Jacobs said. “Thanks to changing technologies and emerging industries, we really need to create a pipeline of workers who are skilled in a wide variety of specialty and high-tech areas. From under-employed workers seeking new skills to high-school-aged and entry-level workers, we are committed to helping everyone gain access to job training, in order to develop a marketable workforce skill.”

The Mayor’s annual Economic Summit was launched in 2013 following a series of nine economic and job summits designed to support the business community. Those meetings, held in 2011 and 2012, focused on key geographic regions and industries such as life sciences, clean technology and international trade.

“Orange County is very proud of facilitating these strategic partnerships between our region’s large and small-to-medium businesses, in order to boost industry synergies and contribute to our continued economic success,” Mayor Jacobs said at Florida TechMatch.