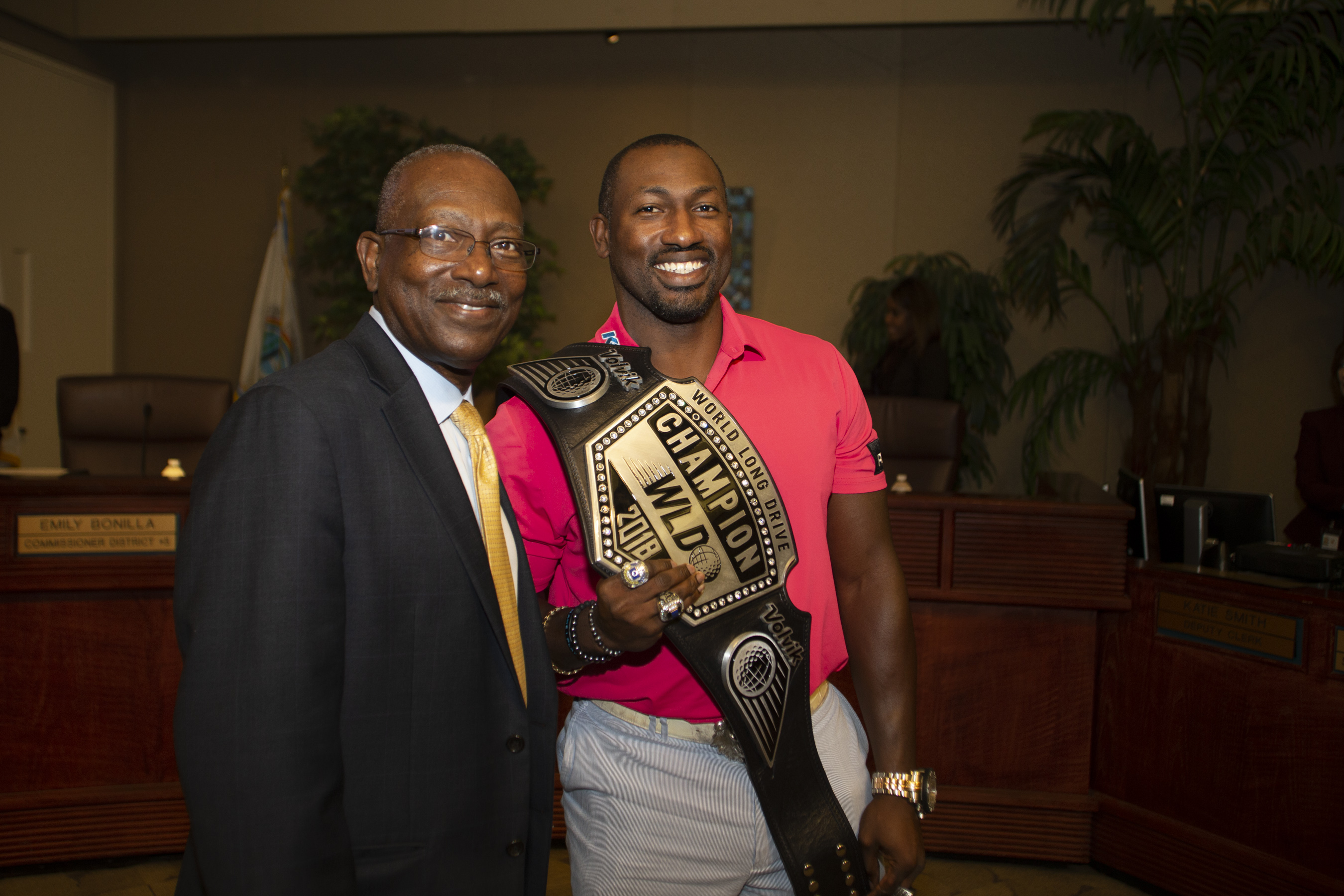 Imagine driving a golf ball the length of four football fields. For most human beings, this is merely a Sunday daydream, but for Pine Hills golfer Maurice Allen, it is a reality. He can pretty much do it on a regular basis, which is why Orange County Board of County Commissioners recently proclaimed Tuesday, November 13, 2018 as “Maurice D. Allen Day” in Orange County.

Allen, known for his muscular frame and flair, can look to his hard work, dedication and perseverance as the reason for his success. He grew up in Pine Hills and attended Hiawassee Elementary School, Robinswood Middle School and Maynard Evans High School. While at Evans, he was an honor roll student and track and field sprinter. He could play golf, too, thanks to his father Jessie introducing him to the sport when he was 7 years old, although it was not his main athletic focus.

“I thought it would be a good sport for him to learn and, since I played, a good point of commonality between us,” said Jessie Allen, who is currently the interim executive director of the Orange County Convention Center. “I would take him to Metro West for lessons with PGA Professional Brad Hauer because with golf it’s important to learn the proper technique at a young age. He was always a good athlete, and even as a little kid he had a talent for hitting it long.”

After graduating high school, Allen attended Florida A&M University, where he continued to excel both as a track and field athlete and student. He graduated with a bachelor’s degree in biology and planned to pursue a degree in chiropractic studies, but it was during this time he rediscovered his passion for golf and decided to leave behind his chiropractic pursuits to focus on golf full time.

“When I was searching for a coach to help me pursue the sport long drive I reached out to Dr. Thomas ‘Doc’ Dorsey, the founder of the Orlando Minority Youth Golf Association,” said Maurice Allen. “I was familiar with Doc from my introduction to the Orlando Minority Golf Association back when I was middle school. I believe in the philosophy that Doc has on the game of golf on and off the course, which was key in me becoming his student. I believe that decision is the biggest factor in me becoming the champion that I am today.”

“When I look back and ask how a kid from Pine Hills became a long drive champion, it’s because no one makes it in life alone, and I definitely had help,” said Allen. “I’m a product of wonderful parenting and mentorship. My parents instilled moral values and a high work ethic in me from the moment I was born.”

In addition to his long drive championships, Allen holds the Guinness World Record for Golf Ball Speed by hitting a golf ball that traveled 211 mph. He has also been designated by the Boys and Girls Club of America as its Ambassador of Golf and frequently works with the Orlando Minority Youth Golf Association as a coach teaching inner city and urban minority youth.

“I couldn’t be prouder of him,” said Jessie. “He’s my hero. He’s put forth a lot of effort and overcome many obstacles as an unknown entity coming out of nowhere.”

Allen is inspired by lyrics from The Notorious B.I.G. song Sky is the Limit, which includes Stay far from timid; Only make moves when your heart’s in it; And live the phrase Sky’s The Limit.

The sky is most definitely the limit for Maurice Allen, who asserted, “I plan on going further and helping others, inspiring people to follow their dreams.”

Photo Caption: [L-R] Jessie Allen, interim executive director at the Orange County Convention Center pictured with his son, Maurice Allen, who was honored for his golf talents at a recent Orange County Board of County Commissioners meeting.