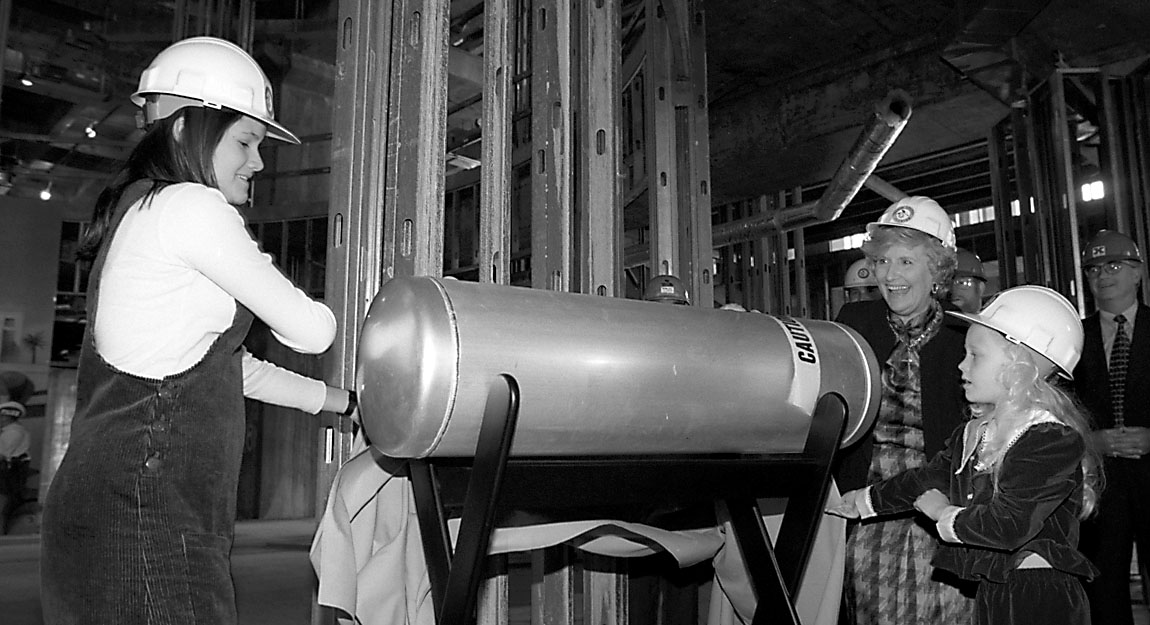 Contents of Time Capsule Reveal Life in Orange County in 1995

A quarter of a century ago, 8-year-old Chickasaw Elementary student Ashely Van Wagoner predicted that in 2020, Orange County residents would be “driving to work in spaceships; flying, just because we can; and eating synthetic foods.” Her bold predictions, as well as those from other residents, were placed inside a time capsule that was dedicated at the Orange County Courthouse construction site in 1995.

The capsule, which looks like a 4-foot-long aluminum alloy torpedo, was ceremoniously opened at the Orange County Courthouse on February 2, 2021, revealing the predictions, as well as newspapers, calendars, scrapbooks and photographs taken by dozens of citizens and civic leaders documenting a “Day in the Life” of Orange County. The ceremony was broadcast on Orange TV as well.

“The capsule is a glimpse into the past, and the items inside show what people living locally back then felt was noteworthy enough to preserve,” said Pamela Schwartz, chief curator at the Orange County Regional History Center. “It’s always exciting to open a time capsule, especially for those who participated in its placement because it’s full of memories and nostalgia.”

Orange County invited Joanne Nydegger, a local resident, to the event, and she was one of many in attendance. She was the 2nd place winner in the Realistic category of the 2020 prediction contest sponsored by the Orlando Sentinel in 1995.

“The contest received 320 submissions of predictions for the future,” said Schwartz. “I think Greg Dawson, a former Sentinel columnist, said it best in a 1995 article stating that the predictions ‘produced provocative discussion about the state of our world and the world to come.’”

Orange County Mayor Jerry L. Demings, who has lived in Orange County his entire life, has always found that time capsules provide a glimpse of the past and hope for the future. “During the pandemic, hope for the future is what our community needs and reminds us how we’ll share our time in history with future generations,” he said.

Some of the predictions landed fairly spot on. Take, for instance, student winner Natalie Hernandez of Conway Middle School, who wrote: “My predictions for the year 2020 are that kids will work on computers all day at school … there will be a remote control to every home that will do simple things like close blinds or shutters, turn on lights, turn on dishwashers …”

“I don’t know where you are now Natalie,” asserted Schwartz, “but I think you can say, ‘I told you so!’”

Some that missed the mark included the following dystopian prediction from Alexander Akerman III: “Disney World and all the other attractions, as well as most of the motels, are deserted, covered by kudzu vines.”