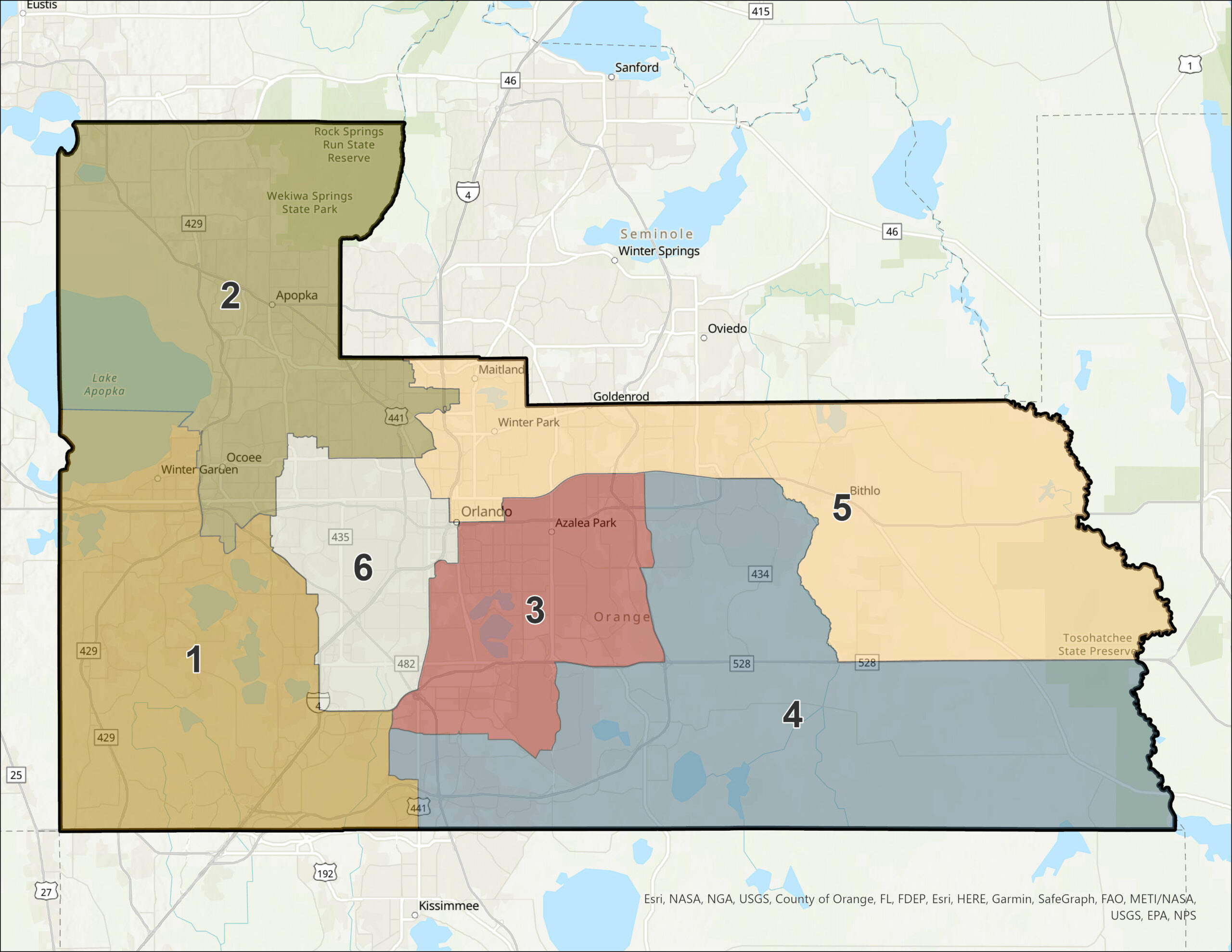 It was a historic vote that comes once a decade. On February 22, 2022, a new redistricting plan was approved which required the Board of County Commissioners to revise the boundaries of Orange County’s six County Commission Districts. The goal of redistricting, which occurs every 10 years, is to make each district as nearly equal in population as possible.

At the hearing, the Board considered and reviewed two redistricting proposals put forth by the Advisory Committee for Redistricting, which was charged with reviewing the 2020 Census data, soliciting public input, analyzing proposed maps and making a recommendation to the Board. After considering the Committee’s recommendations, the Board adopted a final redistricting plan that will be in effect until 2031.

“The Committee was established to accomplish redistricting in an accessible, open, transparent and fair manner,” said Jason Reynolds, AICP, Manager, Neighborhood Services Division. “The Committee acted in an advisory capacity only, and its recommended proposals weren’t binding on the Board, which remained the sole and final authority as to the development and adoption of the final redistricting plan.”

Reynolds, who acted as staff lead for the Committee, stressed how important it was to create a process that was both thorough and transparent. The Committee, made up of 15 members appointed by Mayor Demings and each Commissioner, held 12 public meetings during which they reviewed data, received public feedback and composed viable redistricting maps. At the work session held on January 25, 2022, staff presented the Board with the Committee’s two redistricting map proposals for consideration.

“In 2020, when we started planning the redistricting process, we were in the middle of a pandemic, so we had to be strategic about how to engage as many residents as possible,” explained Reynolds. “Our entire process from start to finish was public-facing, and we provided options that included participation from home by the streaming of meetings via Orange TV and social media, an electronic public comment form and a comprehensive website where residents could get all the information they needed.”

From August through December 2021, the website had 13,000 visitors, and everything discussed at the meetings could be found on the website. This provided an opportunity for as many individuals as possible to participate. As a result, input from residents was robust, with approximately 390 engagements per meeting.

“The process went smoothly considering what’s at stake with redistricting, which is all about fair and equal representation,” said Reynolds. “We had a very transparent process with an abundance of opportunities for residents to participate and let their voices be heard. Our role was to facilitate the process and provide the resources for the Committee to make their recommendations, so from a process standpoint we did a thorough job.”

For more information on the final redistricting plan and map, go to Redistricting 2021: Draw the Line for Fair and Equal Representation.