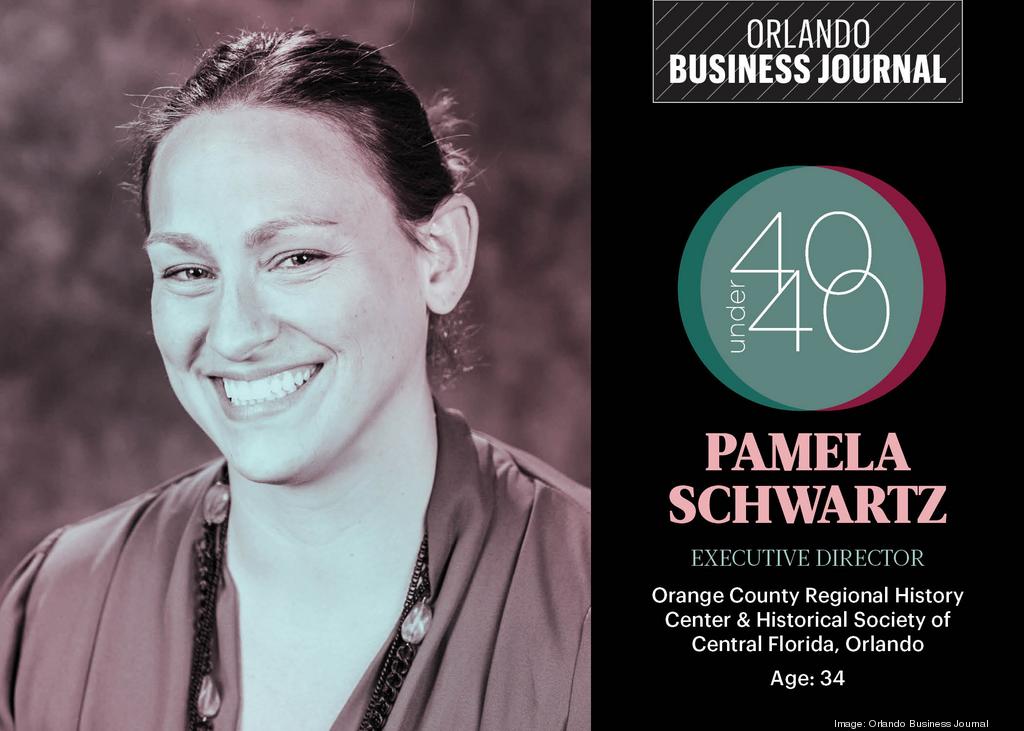 Since being promoted from chief curator to executive director of the Orange County Regional History Center in January 2021, Pamela Schwartz has guided it with a dedication to being a caretaker of the region’s shared history and a commitment to the people who make it possible. She was recently named an Orlando Business Journal “40 Under 40” honoree, which recognizes young professionals who have gone above and beyond in their respective positions and in the community.

Under Schwartz’s leadership, the History Center has achieved multiple accomplishments, including landmark exhibitions that have won nine national awards over the past year alone, including two of the nation’s most prestigious awards for museums from the American Association of State and Local History — the 2021 Award of Excellence in Leadership in History and the 2021 History in Progress award.

Both of these honors were awarded for “Yesterday This Was Home: The Ocoee Massacre of 1920” exhibit, which has helped the community heal from historical trauma. Schwartz became a connecting point among the descendants of the impacted families and provided them a forum to share their histories and connect with one another. She also led recent fundraising efforts to create a digital storytelling platform about the event for all of the state’s educators and youth to use in the fulfillment of State House Bill 1213, which mandates that the Ocoee Massacre be taught to all of Florida’s students.

“There’s a lot of misinformation about the Ocoee Massacre, so one of the things we wanted to accomplish with the exhibition was to set the record straight,” said Schwartz. “The worst stories in our history we tend to know the least about because people wanted to erase them, but the truth goes far deeper for people in the community in which these events occurred, which is why we attempt to use the past to steer the future in a positive way.”

Following the Pulse nightclub shooting in 2016, Schwartz and the History Center’s staff became a national authority on urgent response and contemporary collecting after community tragedy. Her work in spearheading the curation of the One Orlando Collection Initiative has made Schwartz a leader in this space with the knowledge and expertise to offer advice through the crucial moments after a mass tragedy has taken place.

“We need to bring these events to light and educate people by taking a humanizing approach and revealing the impacts these events have on the community,” she asserted. “We’re in a place to serve the community in a variety of ways. We’re educational, but we’re also hopeful towards inspiring people to action through learning and growing from our region’s history.”

It is clear that the OBJ honor is well deserved because Schwartz is a passionate leader who believes that curating history is about more than preserving the past, but about guiding change in the future. And it is evident in her work she is constantly looking to lead the preservation of our community’s history for generations to come.

For more on exhibits and programs at the Orange County Regional History Center, go to the Center’s website.