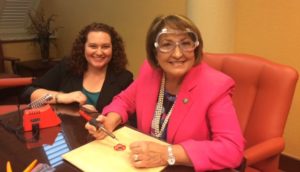 ORLANDO, Fla. (Sept. 4, 2015) — In preparation for the upcoming Maker Faire Orlando on September 12 and 13, 2015, Orange County Mayor Teresa Jacobs became a Maker by learning the basics of soldering as she created her own LED Makey pin.

“The Maker Faire is a great opportunity to promote the culture of creativity and innovation that are the hallmarks of Orange County,” said Orange County Mayor Teresa Jacobs. “I’m very excited that the Maker Faire will again be held at our Orlando Science Center – the third year in a row that they will be hosting this incredibly enriching and fun event!”

Local Maker and event producer Jessica Eson King came to the Mayor’s office and taught Mayor Jacobs how to solder using the “Learn to Solder Skill Badge Kit” that has been used to teach thousands of people of all ages how to solder at Maker Faires across the country.

Maker Faire Orlando guests will be able to create their own Makey pins in the “Learn to Solder” workshop at the event. Once complete, they will have a great blinky robot that they can wear proudly!

Maker Faire Orlando is the greatest show (and tell) on Earth and will be bigger than ever this year! For the third consecutive year, Maker Faire Orlando will be hosted at Orlando Science Center in partnership with the Maker Effect Foundation and, for the first time ever, will include exhibit space at the Orlando Museum of Art and host The Daily City Food Truck Bazaar! The family-friendly event will feature more than 250 local Makers who specialize in DIY science, art, rockets, robots, crafts, hands-on activities and more.

You may also find high-res photos of Maker Faire Orlando 2014 on DropBox.