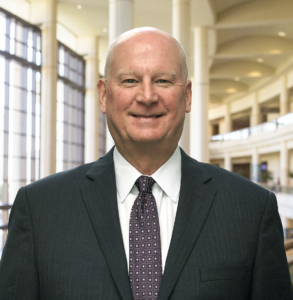 Orange County, Fla. – Mayor Jerry L. Demings is pleased to announce the selection of Mark Tester as the Orange County Convention Center’s (OCCC) new Executive Director. He will be responsible for overall operations, planning, marketing and all activities at the OCCC, while ensuring its positive economic impact for the community.

“I believe Mark Tester’s goals of creating high-end customer service and driving economic impact through sales and marketing aligns perfectly with my expectations for what the Orange County Convention Center can be, both now and in the future,” said Orange County Mayor Jerry L. Demings.

“I greatly appreciate the support of Mayor Demings and the Orange County Board of County Commissioners, and look forward to working with the strong team at the OCCC,” said Tester. “I have always had great admiration for the phenomenal work of the OCCC and its employees, and look forward to my role in Orlando, the nation’s premier destination for conventions.”

In addition to managing the Austin Convention Center Department, Tester was on the Executive Committee of Visit Austin and was the President of Austin Convention Enterprises – the board that oversees the City financed 800-room Hilton Austin.

“I am very honored and humbled to have been a part of Austin’s success, growth and transformation as a host city for conventions and trade shows,” Tester added. “I remain optimistic about the expansion of the Austin Convention Center.”

Prior to Austin, Tester spent 13 years working in the Chicago convention community holding senior positions at both the Chicago Convention and Tourism Bureau (now Choose Chicago) and the Metropolitan Pier and Exposition Authority, the owner and manager at that time of McCormick Place – the western hemisphere’s largest convention facility.

“Mark Tester’s vast experience in the convention center industry will greatly benefit the Orange County Convention Center and the entire region,” said Orange County Administrator Byron Brooks. “He will be able to seize opportunities to increase the number of events, expand the use of available convention space, and maximize the demand for room nights in area hotels.”

Tester grew up in the convention industry. His father operated destination marketing organizations and later, convention and trade shows. Tester earned a B.A. in Communication from Purdue University and will officially join the OCCC on Feb. 10, 2020.

The appointment must still be confirmed by the Orange County Board of County Commissioners (BCC) and is contingent upon confirmation at the BCC meeting on Jan. 14, 2020.