Orange County, Fla. – Orange County Animal Services (OCAS) is currently caring for not one, but two unrelated dogs fighting cancer. Ann and Mazi both arrived at the shelter in early March. Attempts to locate adopters and rescue groups to take them in have so far not been successful so the shelter is turning to the public to help spread the word, in the hopes of landing a suitable home for each dog. The OCAS veterinary team has growing concerns for Ann and Mazi as the shelter environment is far from ideal for these fragile canines.

Ann was brought into the shelter on March 2 along with two younger dogs, suspected to be her puppies, after having been seen loose for several days in a parking lot in Lake Nona. The two younger dogs have since been adopted. Ann is estimated to be approximately seven years old and has multiple mammary masses, which will likely require several surgeries to remove. Mammary masses often develop in unspayed female pets.

Ann has captured the hearts of shelter staff and volunteers. The shelter’s behavior coordinator, Candice Scheibel, stated, “[Ann] was very affectionate toward all people crawling into laps and licking faces with wiggling loose body language.” Ann has shown some hesitation when meeting new dogs in the shelter environment so the shelter is recommending she be introduced slowly to resident pets in her future home.

Mazi was recently impounded at Animal Services on March 9, marking his eighth visit to the shelter since 2016. Most of his returns are the result of housing restrictions and being unwelcome by property owners. The shelter’s veterinarians recently observed swollen lymph nodes and conducted a biopsy. The sample sent for testing revealed lymphoma. Mazi will likely need chemotherapy. 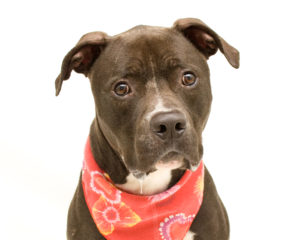 “Mazi’s story is heartbreaking,” said Diane Summers, manager for Orange County Animal Services. “This dog was a puppy when he first came to us back in 2016 and we have watched him be let down time and time again. It’s difficult enough for a large, adult dog to find a home, and now he has the struggle of having cancer on top of that. It’s time his luck turns around and he finally finds that person who will love and care for him like he has always deserved.”

Mazi has shown a lack of interest in other dogs at the shelter and would do best in a home without other dogs or with calm dogs.

Orange County Animal Services is seeking adopters for both dogs. “We recognize this is a big ask from our community, but we believe there are people out there for both Ann and Mazi,” said Summers. “We’re hoping people see this message and step forward, willing to take a chance on these dogs that will undoubtedly have medical expenses and that may not live for years and years. Whatever time they have left, we want them to be loved and to feel safe.”

Those interested in learning more about Ann or Mazi are encouraged to email AnimalServices@ocfl.net. More information can also be found on the Animal Services website.