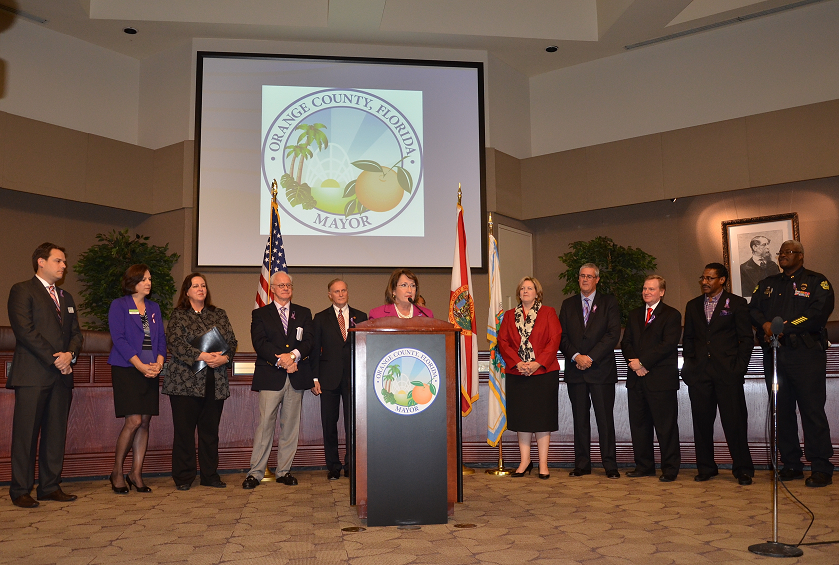 Orange County, FL – To symbolize that love should not hurt, the Orange County Domestic Violence Commission (DVC) held a news conference on Valentine’s Day. The news conference highlighted noteworthy achievements over the last year, including forthcoming legislation advocating for victims of domestic violence.

Orange County Mayor Teresa Jacobs led the news conference and was joined by other presenters including:

“When the Domestic Violence Commission issued its report in June 2013, we made more than 60 recommendations for improvements to support those adults and children in our community who are impacted by domestic violence,” said Circuit Judge Alice Blackwell, Ninth Judicial Circuit Court and Vice Chair of the DVC. “In addition to those accomplishments that we are pointing out today, we have made substantial progress on many of the recommendations. As a caring and concerned community, we must continue our efforts to stop domestic violence and make Orange County a place where all people can live their lives in safety and peace.”

Significant legislation regarding domestic violence is being introduced this session by Senator David Simmons, Florida Senate, District 10. One bill will ensure that victim’s addresses are kept confidential in court records. Another bill will allow prosecution of defendants who violate the “no contact” orders by making telephone calls from jail.

“This sends a clear message to the victims in our community that they are safe. And, to those who hurt victims, they will be held accountable,” said Carol Wick, Chief Executive Officer of Harbor House of Central Florida. “The partnership between law enforcement, county government, our court system and the community shows the intent of community, which is accountability. It’s empowered us to come together and make this happen.”

In addition to the new legislation, here’s an overview of other achievements:

“To anyone who is suffering from violence at the hands of a partner, we are here to help,” said Mayor Teresa Jacobs. “No duty is more sacred, no work more important than protecting those who are most vulnerable. Thanks to our collective efforts, the children and families of Central Florida affected by domestic violence have a voice.”

Background: The Orange County Domestic Violence Committee/Child Abuse Commission was originally convened in 2005 by Honorable Belvin Perry, Jr., Chief Judge, and the late Honorable Lydia Gardner, Clerk of the Courts of Orange County. As a result of several tragic cases occurring over the last several years in Orange County, Mayor Teresa Jacobs and Gardner reconvened the Domestic Violence Commission (DVC) in February 2013, which is co-chaired by the Honorable Alice Blackwell, Circuit Judge with the Ninth Judicial Circuit, and Dick Batchelor, President of Dick Batchelor Management Group, Inc. Commission members were comprised of elected officials in Orange County, criminal justice stakeholders, and community leaders/advocates who had expertise in the field of domestic violence. Over 70 individuals representing a diverse spectrum of the community, as well as survivors, participated in the work of the Domestic Violence Commission.

The Commission produced over 60 recommendations for improvements to services for Orange County families impacted by domestic violence. These recommendations were in the areas of sharing of information, process improvement, education, and data system improvements. Some were short-term goals that could be accomplished quickly and without a great deal of cost, while others were long-term goals that will need the sustained effort of many community partners.

For more information, view the list of Major Achievements over the last year as well as the DVC Progress Report presented in June 2013

A variety of photos from the news conference are available for use by the media and are located on Flickr, http://www.flickr.com/photos/mayorteresajacobs/.

About Orange County Government: Orange County Government strives to serve its citizens and guests with integrity, honesty, fairness and professionalism. Located in Central Florida, Orange County includes 13 municipalities and is home to world famous theme parks, the nation’s second largest convention center, and a thriving life science research park. Seven elected members make up the Board of County Commissioners including the Mayor who is elected countywide. For more information please visit www.OCFL.net or go to the Orange County facebook and twitter pages.