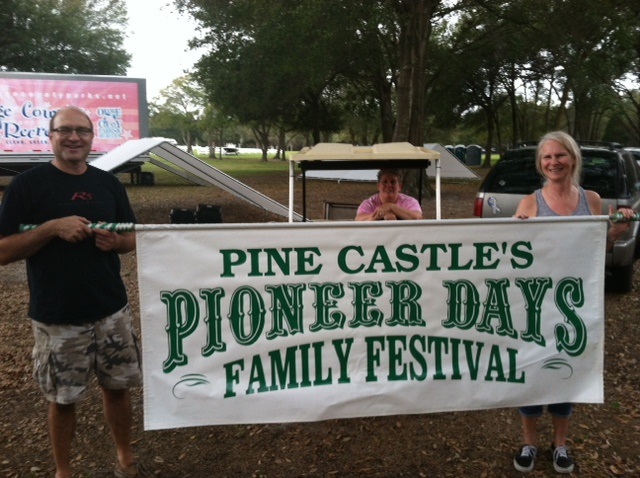 Orange County, FL – Since 1974, the town of Pine Castle has been honoring their heritage with a celebration of unique Orange County history. Pioneer Days is a two-day festival held at Cypress Grove Park filled with demonstrations of original pioneer crafts, exciting historic reenactments, traditional music and storytelling and folk entertainment. On February 22 and 23, the residents and families of Pine Castle came together to celebrate this annual festivity. District 3 Commissioner Pete Clarke was also in attendance, provided remarks and read the official proclamation of Pioneers Days.

“Residents of South Orange County have celebrated their pioneer roots at a variety of community gatherings spanning more than a century,” says Billy Morgan Pine Castle Pioneer Days Chairman. “Last year, when it became clear the festival was outgrowing its original site, Commissioner Pete Clarke came forward with an offer to strengthen the long standing community partnership with Orange County Government by making Cypress Grove Park available as a new venue. This year’s event was the first at the new site and thousands of area residents came together to celebrate the area’s long connection to trains and the railroad.”

The original Pine Castle was a private residence built by poet Will Harney who settled in the area from Ohio immediately following the Civil War. Harney composed many tributes to the tranquil virtues of the Central Florida frontier and endured many hardships pioneer settlers encountered in those days. After claiming the land on Lake Conway south of Orlando, he built a castle using the native pine trees naming the structure “Pine Castle.”

Within a matter of just a few years, the entire neighborhood was referred to as Pine Castle. It was often considered the “most striking landmark between Orlando and Kissimmee” and is situated near the cities of Edgewood and Belle Isle, including the pockets of unincorporated Orange County that surround the Conway chain of lakes. In 1974, as Pine Castle continued to flourish and develop, the residents created an annual festival to celebrate their pioneer spirit.

This year, Pioneer Days offered a wholesome, old-fashion lifestyle experience full of family activities and folk traditions. The festival kicked off with a community parade that followed a theme of trains and railroads. Throughout the weekend attendees enjoyed various events that celebrated their unique history.

Preparations for the 2015 event are already underway. Organizers welcome volunteers with a passion for preserving our local history for future generations of pioneers. For more information, call (407) 427-9692, email pinecastlepioneerdays@hotmail.com, or visit the festival web site www.pinecastlepioneerdays.org.

About Orange County Government: Orange County Government strives to serve its citizens and guests with integrity, honesty, fairness and professionalism. Located in Central Florida, Orange County includes 13 municipalities and is home to world famous theme parks, the nation’s second largest convention center, and a thriving life science research park. Seven elected members make up the Board of County Commissioners including the Mayor who is elected countywide. For more information please visit www.OCFL.net or go to the Orange County facebook and twitter pages.