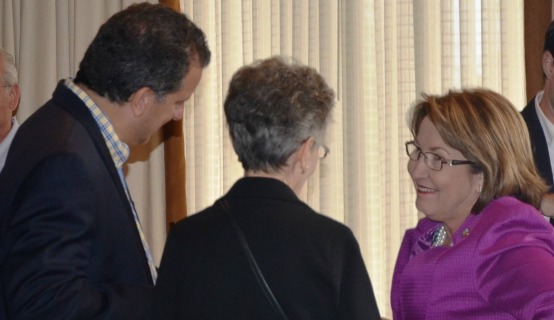 “Our Central Florida region is unique, and not what would typically come to mind when you think of a military base. Our Team Orlando partners are located within the Central Florida Research Park right next to the University of Central Florida, the second largest University in the nation,” Mayor Jacobs said during the event. “We are recognized as the epicenter for Modeling, Simulation & Training throughout the world. So while we are different, our local military commands are focused on supporting our warfighters throughout the state and the country.”

The Mayor’s remarks supporting the goals of the Task Force were made after introductions by the Pensacola Chamber of Commerce Vice President of Armed Services Craig Dalton who currently serves as the Chairman of the FDA and Bay County’s State Representative Jimmy Patronis, who is Chairman of the FDSTF and represents Florida House District 6.

The Task Force is also charged with working with Florida’s Base Commanders to prevent encroachment from impacting the mission capabilities of the state’s military forces and maintaining and expanding the missions of Florida military installations.

Mayor Jacobs responded to the looming threats posed by federal budget cuts and potential defense in 2013 by convening the Modeling, Simulation and Training (MS&T) Blue Ribbon Commission. In the midst of Central Florida’s continuing economic recovery, a critical area of vulnerability exists. The region’s highly valued MS&T cluster is challenged with a significant risk of possible sequestration reductions and could face future rounds of Base Realignment and Closure (BRAC) cuts.

Mobilizing this group has created an unprecedented collaboration and partnership between industry, academia, the region’s military and defense contractors, and smart government with the shared goal of protecting this high-tech industry from sequestration and future BRAC recommendations. The MS&T Blue Ribbon Commission is led by Waymon Armstrong, co-founder and president of Engineering & Computer Simulations Inc. and Thomas l. Baptiste, Lt. Gen., USAF (Ret), President and Executive Director of the National Center for Simulation.

According to Enterprise Florida, the state’s 20 major military installations and defense business presence provide a $73 billion annual economic impact, and account for more than 758,000 jobs in Florida. Defense is the third largest contributor to the state’s economy after agriculture and tourism. The military spent $31.3 billion across Florida in fiscal year 2011 in goods and services, pensions, and salaries.

Florida offers an array of optimum military training environments, including the Joint Gulf Test Range, the Jacksonville Range Complex, and the Eastern Ranges on the Space Coast.