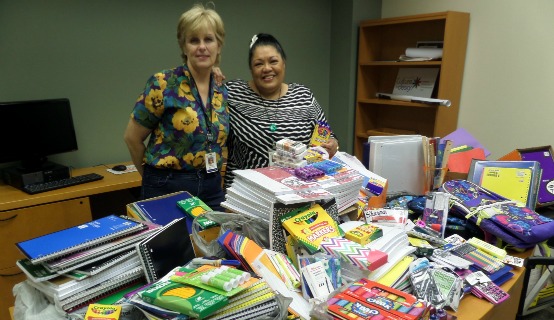 Hundreds of local children and families benefited from several back-to-school events coordinated by employees at the Orange County Convention Center, members of the Board of County Commissioners, and community partners continuing the tradition of Orange County’s “neighbors helping neighbors” philosophy.

“We hope the children gain self-confidence knowing that they have everything they need to make it through the new school year,” said Marina Butler, guest and community relations administrative specialist at the Convention Center. “We want them to understand that they are not alone and that they do have an extended family in us who cares about them and their success.”

Since 2008, employees from the Convention Center have delivered school supplies to the children of Great Oaks Village (GOV), a residential foster group home for children, 6 to 18 years old, who have been removed from their homes by the State of Florida due to abuse, neglect or abandonment. This year, employees rallied to collect pens, pencils, paper, locks and sidewalk chalk totaling $932 for GOV.

For the second year, District 3 Commissioner Pete Clarke hosted a backpack and school supplies giveaway at Orange County’s historic Cypress Grove Park. More than 250 backpacks and supply kits were distributed to the numerous families that attended the event.

“It is important to me that our kids have the necessary materials to start the school year off right,” Commissioner Clarke said. “Aside from materials provided, it is also important that families are aware of the resources available through Orange County and surrounding community agencies that could benefit them now or in the future.”

District 4 Commissioner Jennifer Thompson and her team of volunteers filled 850 backpacks with supplies for families in need. This is the fourth year that Commissioner Thompson has organized a back-to-school supply event for residents in her district.

“No matter how much the economy continues to improve, there are still families who are struggling to make ends meet,” Commissioner Thompson said. “Being able to provide help is a testament to our community and our collective desire to lend a hand to those who need it.”

Commissioner Ted Edwards of District 5 hosted two wildly successful back-to-school events over the course of two back to back weekends in Bithlo and the Goldenrod communities. Local children and families who attended the event received backpacks full of school supplies. Families also received weather radios and enjoyed an array of refreshments.

This year, an especially meaningful contribution was made to Orange County’s Neighborhood Centers for Families by two dozen of the original Tuskegee Airmen and their families who were visiting Orlando for their national convention. The airmen collected $820 at the convention in less than 20 minutes. They provided these funds to the Citizens’ Commission for Children to purchase supplies for distribution at various NCFs including locations in the City of Apopka and the Town of Eatonville. In addition to school supplies in their new backpacks, students also received historical information on the brave and courageous Tuskegee Airmen, who served the nation during World War II and led the charge to desegregate the U.S. military.

“The Tuskegee Airmen have been generous to our country throughout their military careers,” said Tyra Witsell of the Citizens’ Commission for Children. “We salute them as they continue to demonstrate their heroism through their charitable giving.”