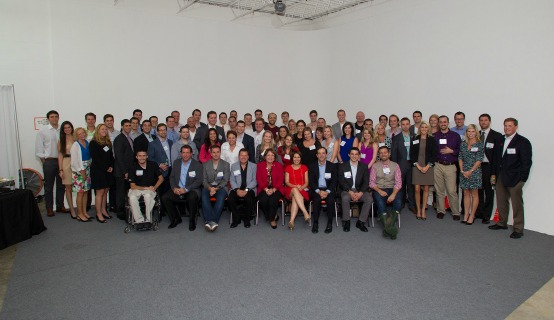 Young professionals from the real-estate and community development industries were provided a unique opportunity to interact and learn from respected leaders in Central Florida during the Visionaries of Central Florida roundtable event held recently at the Orange Studio in downtown Orlando.

“These young people are our future. It is so vitally important that they get involved in their communities, that they let us know what we’re doing right, and what areas they would like to see change in,” Mayor Jacobs said. “We have over 50 advisory boards that help provide citizens the position to make the change they want in their communities. We are always in need of fresh new voices and these bright future leaders are great candidates.”

Mayor Jacobs headlined the group of Visionaries in attendance, which represented the fields of urban planning, development, finance, brokerage, communications, law, sports and entertainment, architecture and design, and city management and government.

This year was the first time that the CREW, NAIOP and ULI-Central Florida worked together to hold this event.

“This event is different than others because [members] can learn ways to incorporate the lessons learned from these mentors into their own career paths,” said Kellee Seif, district council manager of ULI.

ULI Member Zachary Goldberg attended the event and said he enjoyed learning from the mentors and is very excited about Orange County’s transformation in transportation, entertainment, sports and culture. The opening of the new Dr. Phillips Center, the renovated Orlando Citrus Bowl and new attractions on International Drive, including the Orlando Eye observation wheel, Madame Tussauds Orlando Wax Museum and the Sea Life Orlando Aquarium made the opportunity especially timely.

“Orlando is such a young city with amazing potential,” Goldberg said. “It is the place to be right now with its innovations to travel and blossoming job market and economy.”

“Orange County has proved to be one of the most innovative places in my opinion,” Goldberg said. “If people don’t realize that now, they will soon.”

A collection of photos from the Visionaries of Central Florida roundtable event are available on Flickr for use by the media.