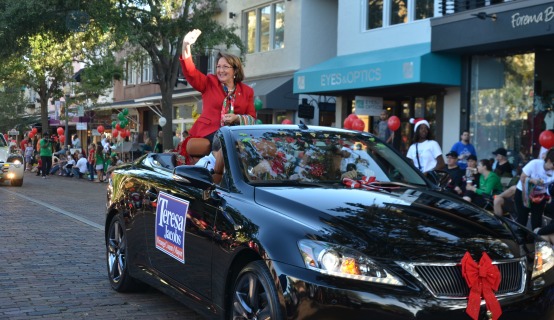 Holiday Parades Celebrate the Season of Joy in Orange County

Orange County Mayor Teresa Jacobs and members of the Board of County Commissioners joined citizens at several holiday parades coordinated by the cities of Winter Park, Winter Garden and Ocoee.

“Our parade marching bands, civic clubs and scout troops truly embody the hometown culture of Orange County,” Mayor Jacobs said. “I wish to thank our volunteers and our city partners for their hard work and efforts in coordinating our parades that bring so much joy to our citizens during the holiday season.”

About 10,000 citizens flooded the streets of Winter Garden for their annual Christmas parade, which ran from South Dillard Street to Winter Garden’s City Hall on West Plant Street. According to the City of Winter Garden, an estimated 65 floats participated in the parade, including Mayor Jacobs, District 1 Commissioner Scott Boyd, Orange County Fire and Rescue and other public safety vehicles and Disney characters.

The City of Ocoee also celebrated their Christmas Parade with Mayor Jacobs, Commissioner Boyd dozens of West-Orange area marching bands, civic clubs, scout troops and local elected officials. The annual event started at the intersections of Maguire Road and Enterprise Street, and ended at Municipal Lakefront Park at Ocoee City Hall. The parade, presented by the Ocoee Lions Club in conjunction with the City of Ocoee, featured floats and vehicles that spread holiday cheer for the Christmas season.

A collection of photos from the Winter Park and Winter Garden parades and additional photos of the City of Ocoee parade are available on Flickr for use by the media.