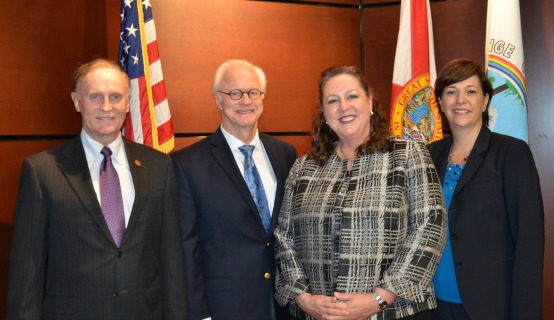 Orange County leaders are helping to further protect domestic violence survivors. Recently, members of the Orange County Domestic Violence Commission (DVC) outlined two bills for the upcoming legislative session this month that will help save lives. Both the bills are sponsored by Senator David Simmons, (Florida Senate, District 10), who is also the Rules Committee Chairman.

The “No contact legislation bill” (Senate Bill 342) will ensure that once an order of no contact has been ordered by the court that it will be in effect immediately – beginning while the perpetrator is in jail and will remain in effect until modified by the court.

“This has been a growing concern that perpetrators of violence, specifically domestic violence, are calling victims from jail to intimidate and harass after an order of no contact had been ordered by the court,” explained Wick.

“Orange County’s Domestic Violence Commission represents a true community-coordinated response to the specific domestic violence issues faced in our community,” said Mayor Teresa Jacobs. “I’m so proud that these pieces of legislation are a result of the Commission’s recommendations. The bills will be instrumental in closing the legal loopholes in our system to ensure that domestic violence survivors get the protection they deserve.”

In addition, the Florida Sheriff’s Association and the Florida Coalition Against Domestic Violence support the legislation.

“As advocates, both of these bills are critical to the safety of not only domestic abuse survivors but any person who is a victim of a crime where the offender still poses a threat,” added Wick. “Very simply, they protect survivors of violent crime and hold offenders responsible.”