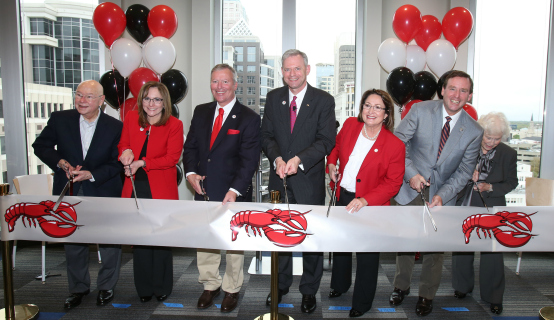 Red Lobster Seafood Co. officially celebrated its move to downtown Orlando, establishing its new restaurant support center and headquarters at CNL Tower 1, where its offices now occupy three and a half floors.

“We are so proud that Red Lobster has chosen to remain in Orlando-Orange County,” said Orange County Mayor Teresa Jacobs. “The county values businesses, like Red Lobster, that are using innovation-driven technology and new ways of thinking to propel them to continued success in the years to come.”

With this move, Red Lobster will now be one of downtown Orlando’s largest employers and the first in the restaurant and hospitality sector, with nearly 300 employees working in the new support center.

“Since its founding in 1968, Red Lobster has been part of the Central Florida community,” said Kim Lopdrup, CEO of Red Lobster. “We are proud to establish our new home in downtown Orlando’s vibrant, rapidly growing central business district. We believe the terrific location will be an advantage to attracting and retaining great talent as we work to make Red Lobster not just the biggest seafood restaurant company in the world, but the best.”

The company plans to hire an additional 50 to 70 employees during the next two years, primarily in information technology, bringing more high-tech, high-wage jobs to the city. Additionally, more than 700 Red Lobster employees from around the country will visit the headquarters annually, to participate in the company’s industry-leading “Manager In Training” program, which provides employees with the skills and training they need to successfully manage a Red Lobster restaurant.

“In the past decade, downtown Orlando has experienced more growth and development than any other city of our size. We have made strategic investments in order to attract large employers and headquarters, like Red Lobster,” said Orlando Mayor Buddy Dyer. “We are excited to welcome Red Lobster, a leader in the restaurant industry and art of hospitality, back to downtown Orlando to continue their legacy of excellence.”

Red Lobster’s move to downtown Orlando will culminate with the opening of its culinary development center this spring. Housed on the ground floor of CNL Tower 1, the center will have three main purposes – to create new, innovative menu items for Red Lobster’s restaurants, to train restaurant managers from around the country, and to host focus groups and other events in a tasting room modeled after a Red Lobster restaurant.