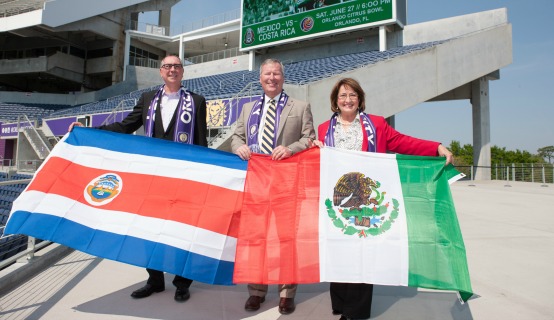 “A Mexican and Costa Rican national team match is a regional event of incredible proportions,” Mayor Jacobs said at the Citrus Bowl. “It draws significant economic impact to the entire region as well as international media awareness. This is more than just a game. It includes several days of activities, including the chance for fans to meet with international soccer legends, the exciting pre-game fan-fest Futbol Fiesta as well as media events.”

Orlando City Soccer Club Founder and CEO Phil Rawlins announced the match at the newly renovated Citrus Bowl stadium with Mayor Jacobs and City of Orlando Mayor Buddy Dyer. The match is described as a crucial practice for both squads as they make final preparations in advance of the CONCACAF Gold Cup, the bi-annual continental championship to be played across North America in July. Capturing the Gold Cup would give the winner a chance to face the United States in a game to qualify for the 2017 FIFA Confederations Cup.

“Part of our ongoing commitment to the community has been to attract global soccer events that drive our local economy, and today we deliver again on that commitment,” Rawlins said at the event. “This is a clash of two major CONCACAF rivals that we expect will draw thousands of fans to the Orlando Citrus Bowl. We want to thank our partners Orlando Venues, the Central Florida Sports Commission and, of course, the City of Orlando and Orange County for their help in securing this event and we look forward to ongoing efforts to secure similar high-caliber events for the ‘Soccer Capital of the South.’”

More than 62,000 Central Florida soccer fans filled the Citrus Bowl on March 8 for the inaugural match of the Orlando City Lions and the New York City Football Club. Fan attendance was the largest ever recorded for a soccer game at the Citrus Bowl, surpassing previous crowds during the 1994 FIFA World Cup. The game drew the second highest attendance numbers during an inaugural MLS match.

In October 2014, Mayor Jacobs joined the community in celebrating the historic groundbreaking of Orlando City Soccer’s new stadium in downtown Orlando, which was followed by a construction start in November. The “March to the Match” celebration, on October 16, marked a monumental milestone in the continued transformation of Orange County into a mecca of economic, cultural and sports opportunities, which are essential to supporting the region’s increasingly diverse and creative population.

The stadium is part of Orange County’s approved use of tourism tax dollars for a $94.5 million venues package, marking the transformational era of sports, creativity and arts-driven economic development and innovation for the region.

An exclusive pre-sale of package ticket plans for the international match will begin on March 23 at 10 a.m. at the Orlando City Soccer Club website. Single-game tickets for the Mexico vs. Costa Rica match will go on sale to the general public on April 15 at 10 a.m. via Ticketmaster or by calling 1-800-745-3000.

A collection of photos from the MLS Announcement are available for use by the media and are located on Flickr.