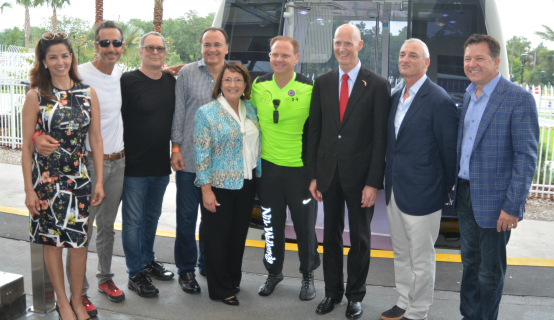 On Wednesday, April 29, Orange County Mayor Teresa Jacobs joined high-wire walker Nik Wallenda, Gov. Rick Scott and other dignitaries for the opening of Orlando Eye, the centerpiece of the new $250 million I-Drive 360 complex, which features a blend of attractions, restaurants, clubs and shops, on the world-famous International Drive.

Wallenda walked the edge of the 400-foot-high spinning wheel without a harness or wire and set a new Guinness World Record that was televised live on NBC’s “Today” show. Wallenda is recognized around the world for his stunning acrobatic stunts and high wire performances, including crossing the Grand Canyon, walking over Niagara Falls and crossing two Chicago skyscrapers, the latter of which while blindfolded.

“In addition to bringing an amazing new attraction to the heart of our tourism corridor, the opening of the Orlando Eye also marks a time of great transformation and reinvention for our region,” Mayor Jacobs said.

More than 62 million people visited Orlando in 2014, a new all-time record for the U.S. travel industry, solidifying Orlando’s position as the most-visited destination in the nation.

“With this grand opening event, we expand the reach of Florida’s reputation as a great place to do business, and the best place for family or luxury entertainment,” Mayor Jacobs said.

The observation wheel’s air-conditioned cabins will hold dozens of guests in each car, offering them a bird’s eye view of Central Florida when it opens to the public on May 4. I-Drive 360 is additionally anchored by the world-famous Madame Tussaud’s, an immersive and interactive wax experience—SEA LIFE Orlando Aquarium, which features a 360-degree ocean tunnel and more than 5,000 creatures, and the unique Skeletons: Animals Unveiled! Experience, which features the skeletons of 400 different species. Accompanying the entertainment experiences, visitors can enjoy a diverse array of dining and nightlife options such as Yard House, Tin Roof, Sugar Factory and more. Sean and Catherine Lowe, stars of ABC’s “The Bachelor,” experienced the exciting blend of attractions firsthand, as Catherine celebrated her golden birthday – 29 years old on the 29th – at the complex.

“On the heels of a record-breaking year for visitors to Orlando in 2014, I-Drive 360 is poised to become the newest and hottest offering,” said John Stine, I-Drive 360’s director of marketing and sales. “We are thrilled to bring this experience, which is unlike anything else in Orlando, to complement the dynamic destination.”

To meet the needs of a growing number of visitors, Orange County has made investments in infrastructure, including investing in an important expansion and renovation of the OCCC to continue drawing domestic and international convention business.

Visitors to Orlando in 2015 are the first to see the new I-Drive 360 attractions and venues from Merlin Entertainments and Unicorp. Plus they will experience the first full year of other exciting expansions. Walt Disney World Resort opened the New Fantasyland and is transforming Downtown Disney into Disney Springs, while the Universal Orlando Resort opened the Wizarding World of Harry Potter – Diagon Alley in 2014

In addition to enchanting visitors, Central Florida’s robust travel and hospitality industry adds enormously to the quality of life for Orange County citizens. Thanks to TDT revenues, the Orlando Citrus Bowl stadium was renovated into an essentially “new” NFL-style stadium, with cutting-edge technology and fan amenities. TDT funds have also contributed to building the acclaimed Dr. Phillips Center for the Performing Arts, the renowned Amway Center – the gold standard in NBA facilities for fans and athletes alike, and the new MLS Soccer Stadium.

The collections of photos from the opening of the Orlando Eye at I-Drive 360 are available for use by the media and are located on Flickr. Collection 1 | Collection 2