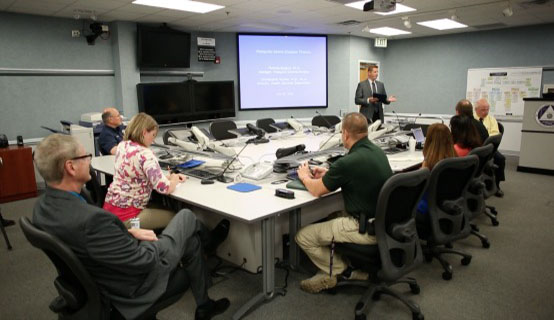 Chikungunya is a viral disease that is transmitted to people by mosquitoes. It has occurred in Africa, Southern Europe, Southeast Asia and islands in the Indian and Pacific Ocean. In 2013, Chikungunya was found for the first time in the Americas.

Chikungunya can only be transmitted by two types of mosquitoes in Florida: the Aedes albopictus (Asian Tiger mosquito) and Aedes aegypti (Yellow Fever mosquito). It cannot be spread by humans or animals. Children and seniors are not more susceptible to the virus, but they are likely to suffer more serious symptoms. There is no vaccine or medication available to prevent infection, and the virus can only be treated symptomatically.

It’s important to note that these mosquitoes are “day-biters” and they are drawn to standing water, not large bodies of water such as lakes and retention ponds.

“The most important thing people can do is to get rid of standing water,” said Christopher Hunter, M.D., director of Orange County’s Health Services Department. “We’ve found these mosquitoes in gutters, children’s wagons and bird baths. The mosquito can go from egg to adult in seven days, so draining and dumping unnecessary water around your residence is essential to prevention.”

There are additional ways to decrease mosquito exposure such as the use of air conditioning and door screens, covering extremities with clothing and wearing mosquito repellent that contains DEET (N,N-Diethyl-3-methylbenzamide), which is the gold standard in bug spray. For more information, visit CDC.

Orange County’s Mosquito Control Office, which actively sprays to control the mosquito population, is a resource available to all citizens, including those who would like their property checked for these mosquitos. Call 407-254-9120 for Mosquito Control, or dial 311 to learn more about related services provided by Orange County Government.