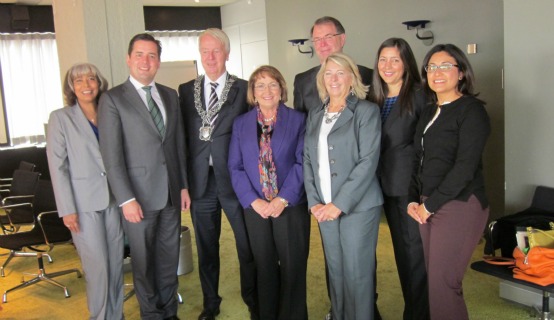 Mayor Teresa Jacobs recently led an economic development mission to the Netherlands and Germany. Orange County has had a Sister Cities agreement with the region of North Brabant since September 2012. This was Orange County’s first trip to the region, reciprocating the three previous visits to Orlando from the North Brabant and Tilburg governments.

The mission group included Orange County’s Office of Economic & Trade Tourism Development, the Orlando Economic Development Commission, the University of Central Florida and Orlando International Airport. Mayor Jacobs’ visit started in the City of Tilburg, located in the region of North Brabant in the Netherlands.

North Brabant is the south central mainland province of the Netherlands. Orange County and the region of North Brabant, or Hart van Brabant by its Dutch name, have diverse commonalities as they share the same key industries and objectives of attracting investment, cultivating innovation and promoting collaboration between education institutions. Mayor Jacobs’ visit focused on the key industries shared by both regions such as tourism, healthcare, life sciences, and aerospace.

Mayor Jacobs’ visit to the Netherlands included meetings with the City of Tilburg Mayor Peter Noordanus and Vice Mayor City of Tilburg Erik de Rider. Additionally, Mayor Jacobs met with Hans Janssen, Mayor of Oisterwijk – a municipality and city in the province of North Brabant—and signed the city guest book for the municipality of Gilze en Rijen accompanied by the city’s Mayor Jan Boelhouwer.

Mayor Jacobs focused on the advantages of doing business in Orange County and shared the region’s branding campaign, “Orlando. You don’t know the half of it.” during a seminar that was attended by a number of local Dutch companies.

Mayor Jacobs wrapped her visit to North Brabant by touring the Efteling, which is a fantasy-themed amusement park in Kaatsheuvel in the Netherlands. The attractions are based on elements from ancient myths and legends, fairy tales, fables, and folklore.

The mission continued in Germany where Mayor Jacobs participated in one-on-one business development meetings with companies in the cities of Munich and Nuremberg.