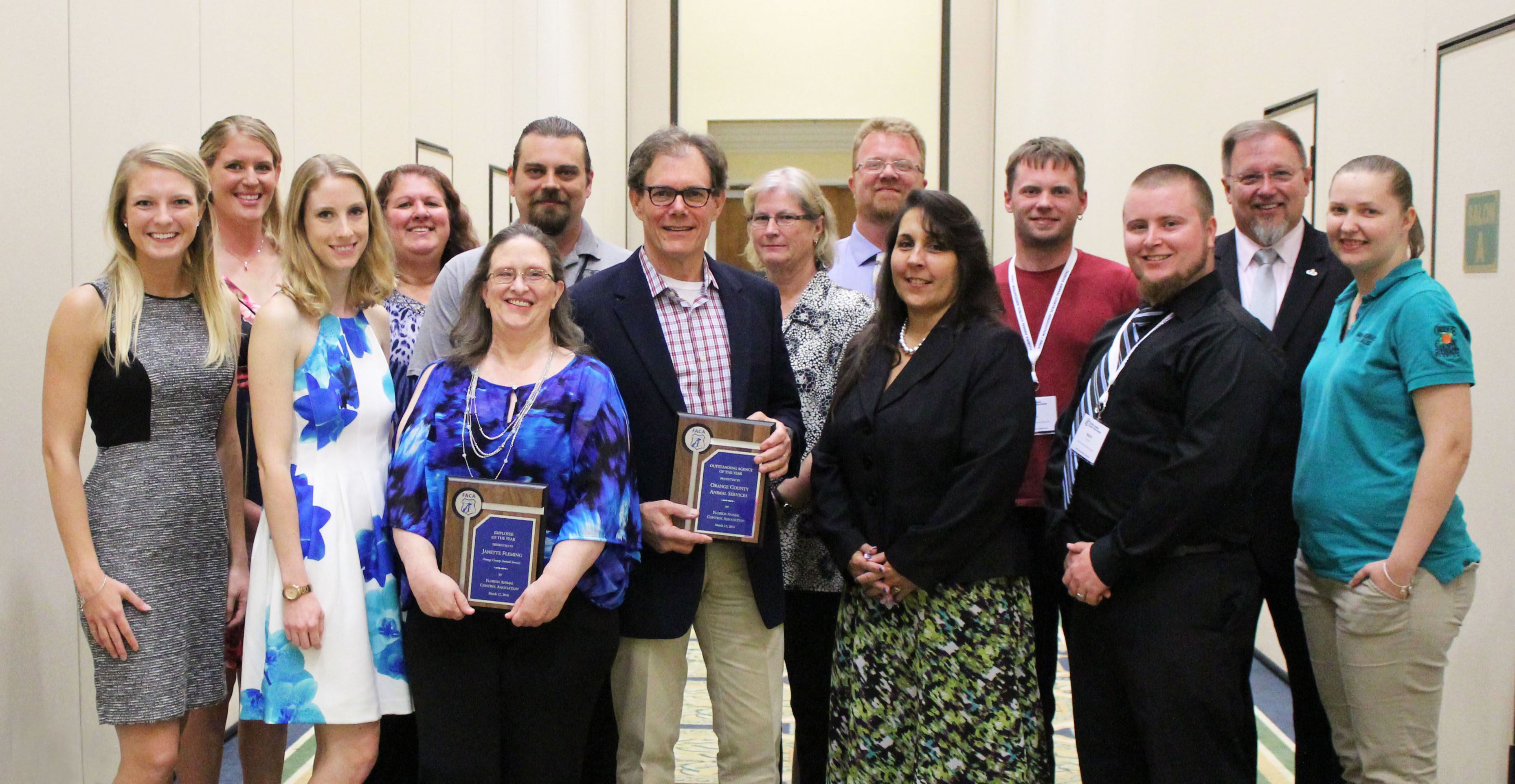 The Florida Animal Control Association, which consists of 52 county shelters spanning from Key West to Florida panhandle, recently named Orange County Animal Services as “Outstanding Agency of the Year.” The award was presented at the association’s annual conference held at Kissimmee’s Park Inn by Radisson Resort on Saturday, March 12.

“We feel so honored to be recognized for our hard work and are thankful to those in the community who played a role in this achievement,” said Dil Luther, division manager of Orange County Animal Services. “We will continue to strive for success and take this as a challenge to further better ourselves for the benefit or Orange County’s pets.”

Orange County Animal Services composed a nine-page nomination which attributed the shelter’s recent success to a three-point strategy to improve the community for pets. The tactics consisted of boosting the live release rate, improving the shelter image and developing programs to help manage the pet population in the community.

The shelter’s live release rate is composed of positive outcomes for pets including adoption, reclaimed by family, transferred to rescue partner and foster care and has improved drastically over recent years. The shelter attributes this to expanded operational hours, social media efforts, additional staff in key roles and the removal of breed designations. In recent months, the shelter was able to achieve a 90 percent live release rate for dogs and 52 percent for cats, the highest in the shelter’s 47 year history.

Strides to improve the shelter’s image were propelled by volunteers and media outlets. Pawsitive Shelter Photography, a volunteer group whose work has been nationally recognized, takes high-quality pictures of the homeless pets, helping perspective adopters better visualize that pet situated in their home. Several local media outlets, including WOLF Fox 35, WESH Channel 2, Power95.3, K92.3 and the Orlando Sentinel, have begun highlighting the shelter pets on a regular basis.

The shelter is still combating the pet overpopulation problem that faces the community and has developed programs to reduce the number of unwanted litters and keep pets with their current families. This resulted in a seven percent decrease in homeless animals entering the shelter from fiscal year 2014 to fiscal year 2015.

“Our ultimate goal is to reduce the number of unwanted pets and be able to find loving homes for all those in need,” said Luther. “We chisel away at this goal each day and this award is a treasured milestone along the way.”

Orange County Animal Services team member Janette Fleming also took home the award for “Employee of the Year.” Janette provides a warm welcome to the more than 100,000 shelter visitors each year by working in the front lobby and assisting adopters.

Find out more about Orange County Animal Services at www.ocnetpets.com.