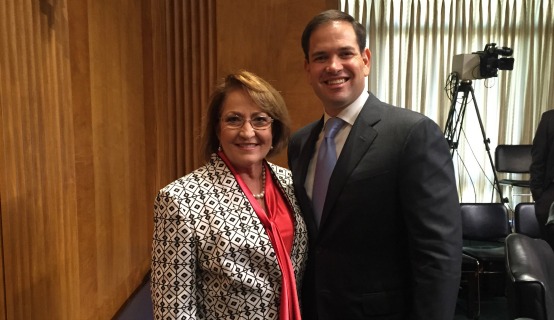 Sen. Marco Rubio, R-Fla., chairman of the subcommittee, invited Mayor Jacobs to testify at the hearing regarding the devastating impact of heroin abuse and overdoses in Orange County.

“Last year, we lost 85 lives to heroin, a staggering 600 percent increase since 2011. Already this year, we’ve had more than 90 heroin overdoses in the county, with about one in 10 resulting in death,” Mayor Jacobs said during her testimony. “To end this crisis, to save lives, we all need to be engaged.”

Mayor Jacobs closed her testimony by urging the Senate to work together to stop the influx of drugs from across the border. Mayor Jacobs added that there should be avenues for the uninsured to receive treatment for heroin and other drug related addictions.

Mayor Jacobs formed Orange County’s Heroin Task Force in July 2015 and invited Orange County Sheriff Jerry L. Demings to serve as co-chair. The task force concluded its efforts in March, delivering 37 targeted recommendations, from increased bond and trafficking penalties to social media campaigns warning young people about the deadly nature of heroin, as well as additional education, training and treatment to fight the addiction. In addition to working with Central Florida legislators to gain passage of HB 1241, which allows non-prescription access to the overdose-reversing drug Naloxone, the task force will be rolling out an anti-heroin social media campaign later this summer.