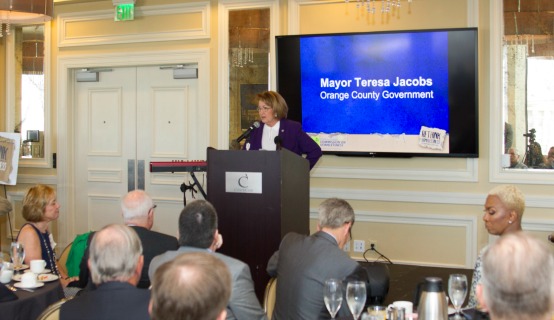 “Your leadership –and that of your colleagues throughout the region—has been instrumental as we work together to ensure that every veteran in our country has a home,” said Doherty in a letter to Mayor Jacobs. “We are confident that the infrastructure and systems you have built will ensure that any veteran experiencing chronic homelessness in the region will get the support they need to quickly obtain a permanent home.”

USICH, the Department of Housing and Urban Development and the Department of Veterans Affairs confirmed that Orange County, as well as Osceola and Seminole counties have achieved the milestone of effectively ending chronic homelessness among veterans.

“Our veterans – who have defended democracy and our American way of life – are deeply deserving of our support,” Mayor Teresa Jacobs said. “We have taken a stand for our veterans, and that has inspired others to help. Our focus has been clear – to make homelessness, brief, rare and a one-time occurrence. Through collaborative efforts, we’ve created a system that other communities can put into place to identify and house chronically homeless Veterans.”

Orange County answered First Lady Michelle Obama’s call to action through the Mayors Challenge to End Veteran Homelessness. Orange County will continue to work to end homelessness for veterans and all citizens.

According to numbers released in May 2016 by the Homeless Services Network of Central Florida (HSN), Central Florida’s annual “Point-in-Time” (PIT) census identified a one-year 23.6 percent decrease in the number of homeless individuals in Orange, Osceola, and Seminole counties, as of Jan. 27, 2016.

In Orange County and throughout Central Florida, significant efforts remain ongoing to align existing models with national best practices, which focus on a “Housing First” national philosophy. Through the collaborative efforts of key stakeholders, including the business community, nonprofit providers, faith groups and regional jurisdictions, the tri-county area continues to focus on reducing veteran, chronic and family homelessness.