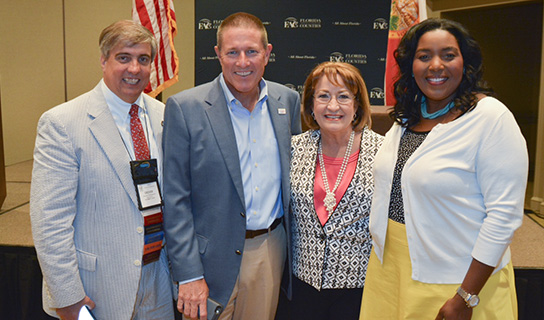 The FAC Annual Conference offers hundreds of commissioners and county staff from across the state the opportunity to come together for continuing education, the sharing of best practices and networking. In addition to educational sessions, the event also includes more than 100 educational booths with exhibitors from around the country sharing cost-saving tools and products for county governments.

The opening session began with a moment of silence for those who lost their lives in the Pulse nightclub tragedy. Mayor Jacobs thanked members of the FAC for their support during this difficult time.

“Leaders and elected officials from throughout the State of Florida and the nation reached out immediately, with many coming that day to show their support and offer assistance in any way possible,” said Mayor Jacobs. “We came together not just as Orlando and Orange County, but as a country. I could not be more proud of how everyone has united in the wake of this tragedy.”

Mayor Jacobs served as the FAC president from 2007 to 2008 and said public servants often use the summer months to work on critical issues that affect their communities.

“Summertime for us means budgets, work sessions and public hearings. It means analyzing the new state budget, ramping up for the implementation of new programs and educating the public about new laws or regulations,” said Mayor Jacobs. “The fact that you’re here today, ready to work and ready to learn, demonstrates that you love what you do and that you care deeply about your communities.”

This is the third time FAC has chosen Central Florida for its annual conference in recent years. The conference was held at the Hilton Bonnet Creek in 2014 and at the Orlando World Center Marriott in 2012.

“I could not be more humbled to be here in Orange County,” said FAC Executive Director Scott Shalley. “I’m proud to be associated, even in a small way, with Orange County and Mayor Jacobs.”

In her closing remarks, Mayor Jacobs thanked the public servants for their continued commitment to improving the lives of all Floridians.