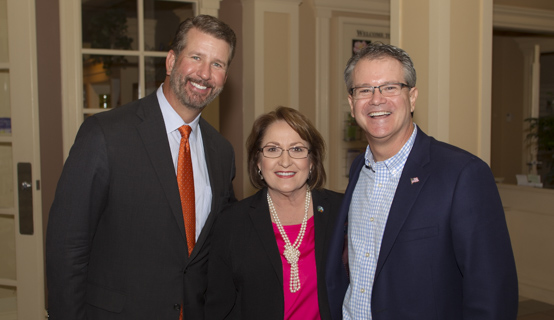 Local community and business leaders gathered at Harry P. Leu Gardens on Sept. 7 to kick off Class 92 of Leadership Orlando. The intensive, nine-session course provides Central Floridians in the business community the opportunity for team-building and to develop their leadership skills in a group setting.

Orange County Mayor Teresa Jacobs joined the group and spoke about how local leaders came together to unite the community after the Pulse nightclub tragedy on June 12, 2016.

“I truly believe that it’s not what you do that defines you, but rather how you respond,” Mayor Jacobs said. “Elected officials, community leaders, interfaith leaders, LGBTQ organizations and citizens came together like never before. We stood united, sharing a message of love and acceptance, proving that hate will not win, and love will prevail.”

She called upon the group of Central Florida leaders to continue promoting a community of acceptance.

“Orlando and Orange County have made diversity one of our greatest strengths and the world is seeing that now,” Mayor Jacobs said. “We must continue to let our diversity shine and work toward a more embracing culture.”

In session one, class members discussed the effect and recovery from terrorist attacks that have occurred internationally. Leadership from the Central Florida Partnership hosted a panel discussion and John Gallagher, President of the Global Engagement Institute, examined the disruptive influences on communities around the world, specifically the Pulse tragedy’s impact on Orlando.

Leadership Orlando is a community leadership program that creates opportunities to observe, interact and learn from public, private and civic leaders across Central Florida.