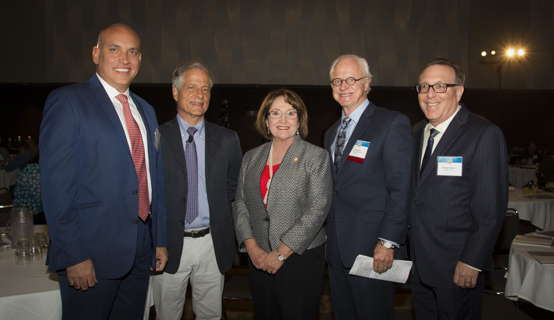 Orange County Mayor Teresa Jacobs hosted the inaugural Regional Affordable Housing Summit on Oct. 20 at the Orange County Convention Center. Planners, developers and local government leaders from across the region gathered to explore affordable housing solutions for Central Florida, including strategies, tools and best practices being implemented throughout Florida and across the country.

“It’s imperative that throughout our region, we explore a variety of available housing options to encourage a more inclusive housing market conducive to sustainable communities,” Mayor Jacobs said. “This Regional Affordable Housing Summit tackles a wide variety of issues and solutions, and will be followed by a number of topic -specific workshops in 2017. Particularly, as our economy continues to flourish, it is vital that we take action to help support our citizens through the creation of a robust housing marketplace.”

The goal of the summit is to utilize the community’s collective experience and knowledge to create a regional approach to address affordable housing needs.

“The purpose of the summit is to share creative solutions that have worked in other areas in order to develop more sustainable communities in our region,” Glasser said. “The summit will propel the work we have already started with our regional partners. It will move us from discussion to analysis and eventually to policy actions that encourage the housing market to include elements of affordable housing into plans and developments.”

President and CEO of the Florida Housing Coalition Jaimie Ross was the opening keynote speaker and discussed the affordable housing crisis on a national level. The lunch keynote speaker, Andrés Duany Co-founder of Duany Plater-Zyberk & Co., is an architect, urban designer, planner and author, and has dedicated more than three decades to pioneering a vision for sustainable urban development and its implementation. He discussed innovative strategies for achieving ample affordable housing options.

“As a society, we have exterminated affordable housing,” Duany said. “It’s important that we train our younger generations to build affordable housing options for the future. By doing so, we can build resilient cities that can survive bad times.”

Rising housing costs are straining budgets and placing individuals and families at the risk of homelessness. It is vital to develop and implement strategies that will result in more inclusive and diverse housing markets in order to create and maintain sustainable communities. Affordable housing options might include mixed-use/mixed-income neighborhoods, transit-oriented developments and various housing prototypes.

According to the University of Florida’s Shimberg Center for Housing Studies 2016 Rental Market Study Report, the Orlando-Kissimmee-Sanford Metropolitan Statistical Area (MSA) has a deficiency of 33,577 units for very low income households. This is the third highest deficiency in the state after the Miami-Dade/Fort Lauderdale MSA. While affordable housing inventory remains low, population estimates continue to grow. Based on projections from the Bureau of Economic and Business Research at the University of Florida, the population in Orange, Osceola, Seminole, Lake and Sumter counties is expected to grow from 2.4 million in 2015 to 3.8 million by 2040.

Recognizing this trend, leaders from Orange, Osceola and Seminole counties and the City of Orlando participated in several regional affordable housing roundtable discussions last year. These discussions reviewed current housing programs and incentives, their effectiveness as well as their successes in other communities.

The Regional Affordable Housing Summit is just one of the first steps toward finding affordable housing options for the region’s growing population. To increase the production and availability of affordable housing, subsequent implementation workshops will explore regulatory mechanisms, possible development of infill locations and available marketplace incentives. Summit attendees, community leaders, elected officials, housing and planning experts, developers and citizens will be invited to attend several implementation workshops through 2017.

Orange County has allocated $5 million of local INVEST funds to be leveraged with other public and private resources in order to create new affordable units for low and very low income households.

“With our strong history of collaboration and a well-developed regional commitment to housing our most vulnerable citizens and families, we have an incredibly unique opportunity to explore different housing models and solutions,” Mayor Jacobs said. “In the end, creating inclusive communities must be a shared goal for developers, bankers, government leaders, builders… truly, our entire community. Our affordable housing options should look just like our marketplace options, with high-quality design elements, and offering a superior quality of life.”