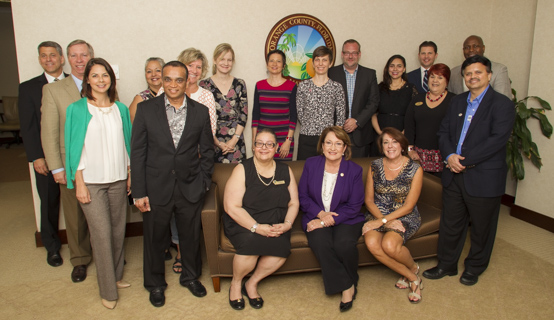 Orange County Mayor Teresa Jacobs and leaders from area chambers of commerce gathered to discuss tourism, culture and the economy on Oct. 14.

Orange County Mayor Teresa Jacobs hosted a diverse group of leaders from area chambers of commerce and economic development organizations for coffee and conversation on Oct. 14.

The goal of the informal meeting was to gather local business leaders to connect and to strengthen relationships with one another. The group discussed tourism, culture, the economy and also explored local economic opportunities.

“We’re creating a future in which opportunity is boundless and where businesses can truly succeed,” Mayor Jacobs said. “Our diversified, high-tech economy has evolved into a global hub for international business investment, as well as local innovation and synergy. We look forward to creating more opportunities to collaborate on economic, educational and cultural exchanges.”

President of the West Orange Chamber of Commerce Stina D’Uva provided an update on the Florida Association of Chamber Professionals. Chair of the Board of Directors for the Orlando Economic Development Commission (EDC) Robert Utsey presented an update on Mayor Teresa Jacobs’ regional branding campaign with the EDC, “Orlando, You don’t know the half of it.” He also outlined the organization’s merger with the Orlando Regional Chamber of Commerce – Orlando, Inc.

Jim Thomas, Executive Director of the Orlando Regional Chamber of Commerce, shared that Orlando is a finalist to become the host-city for the 2019 World Chambers Congress. Orlando is competing against Rio De Janeiro, Brazil and Bogota, Colombia for the opportunity.

The World Chambers Congress is organized by the International Chamber of Commerce World Chambers Federation. Held every two years in a different region of the world, the Congress is the only international forum for chamber leaders and professionals to share best-practices, exchange ideas, develop networks, address the latest business issues affecting their communities and learn about new areas of innovation from chambers around the world.

A collection of photos from the chamber of commerce gathering is available on Mayor Jacobs’ Flickr album.