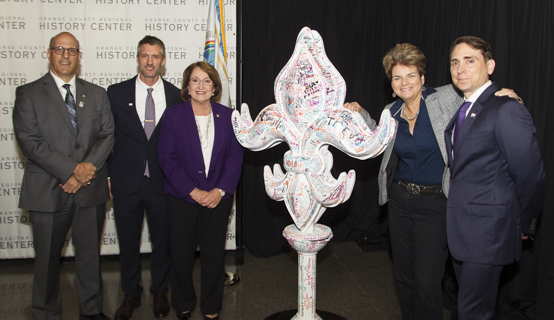 The five-foot monument, which displays personal messages of condolences and support from New Orleans citizens, was dedicated into the One Orlando Collection on Oct. 14.

The One Orlando Collection Initiative is a partnership between Orange County Government and the City of Orlando. Following the Pulse tragedy, Orange County’s Regional History Center became the repository and caretaker of Pulse tribute items and has photographed, catalogued and preserved thousands of Pulse mementos and remembrances.

Orange County Mayor Teresa Jacobs expressed her gratitude toward the New Orleans community during the ceremony at the History Center.

“I want to thank the New Orleans community for thinking of us in our darkest hour and for donating this symbol of New Orleans’ support for Orlando and our LGBTQ community,” Mayor Jacobs said. “The outpouring of love and support we received throughout the world was unlike anything we’ve ever seen or experienced. We have all witnessed amazing examples of compassion and unity proving that only love can conquer hate, and love always prevails.”

This gift, accompanied by a monetary donation to the onePULSE Foundation and One Orlando Fund, was coordinated by the New Orleans Convention and Visitors Bureau’s Tourism Marketing Corporation and New Orleans LGBT Hospitality Alliance, which works to build partnerships and increase awareness of the lesbian, gay, bisexual and transgender hospitality industry and its allies.

“The fleur-de-lis symbol became a sign of resiliency and pride for a lot of New Orleanians in the months and years following Hurricane Katrina,” said Jeremy Cooker, Vice President of Marketing and Special Projects for New Orleans Tourism Marketing Corporation. “It really helped us unite in a common cause; to rebuild, love one another and strive to be our best selves. Today, it is our hope that this symbol, in some small way, will serve the same purpose for your community, as a reminder that New Orleans stands beside you, in love and in spirit.”

City of Orlando District 4 Commissioner Patty Sheehan and representatives from The Center, Zebra Coalition, MBA Orlando and the GLBT Museum attended the ceremony.
Orange County Regional History Center Museum Manager Michael Perkins announced that the memorial fleur-de-lis will remain on display in the History Center’s atrium. The sculpture, along with the 49 Pulse tribute crosses, will also be displayed for the Come out with Pride Orlando parade scheduled to occur in downtown Orlando on Nov. 12.

“We sincerely thank our guests from New Orleans for this gift,” Perkins said. “This will be a treasured piece of the One Orlando Collection and is another example of the country standing behind us during this grave time.”

Since the tragedy, Orange County’s History Center estimates that they have collected nearly 5,000 pieces, curated from the numerous memorials established throughout Orange County. The History Center serves as the repository and caretaker for the physical tribute items, which will continue to be collected and handled with great dignity as part of the One Orlando Collection Initiative.

The collection includes large, very public displays of condolences including the 49 white tribute crosses from Orlando Regional Medical Center and an iconic IKEA sofa which was placed at the Dr. Phillips Center of Performing Arts memorial site.