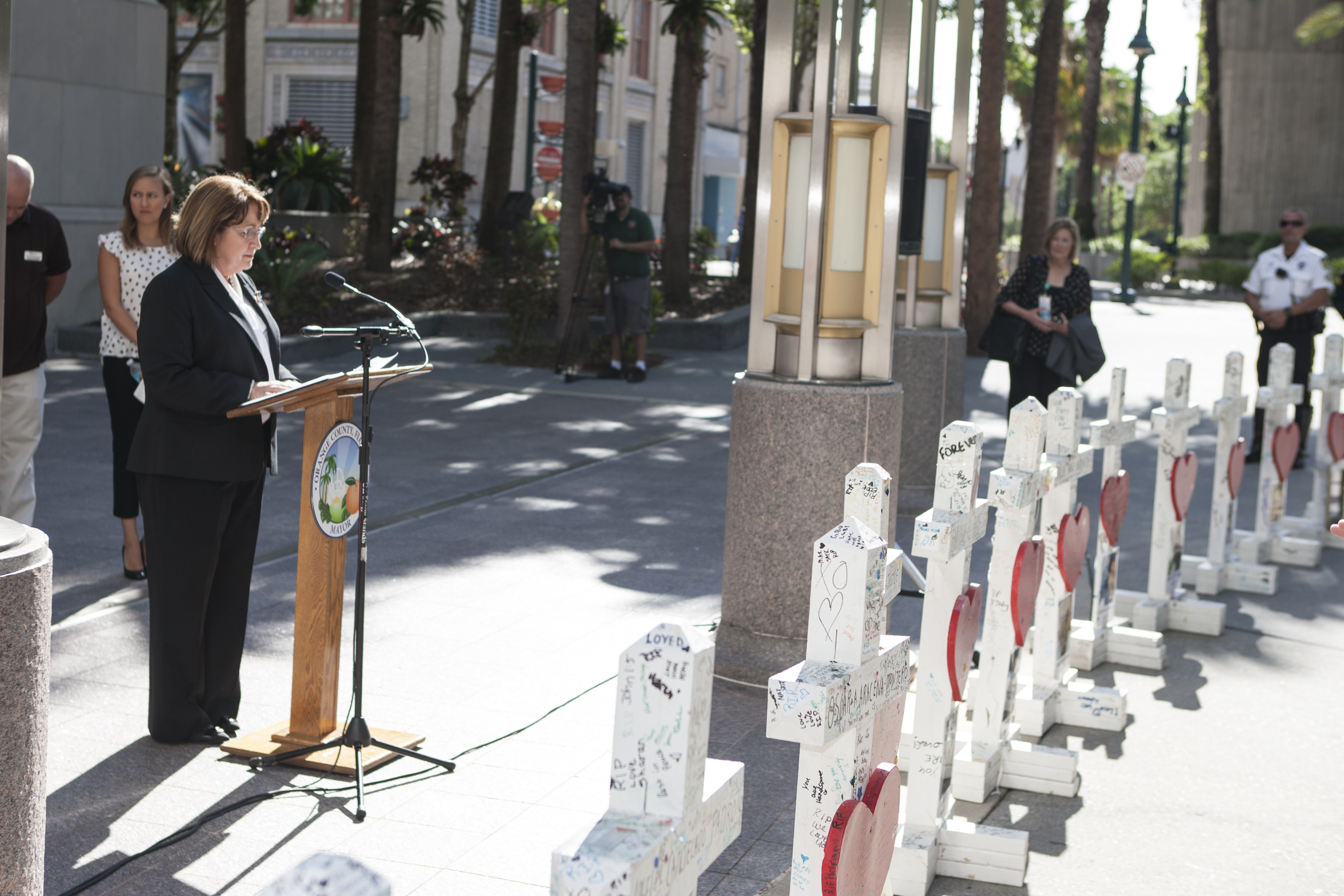 The 49 Pulse tribute crosses placed alongside Lake Beauty on the Orlando Health campus were transferred to Orange County’s Regional History Center on July 12, one month after the Pulse nightclub tragedy.

Following a ceremony led by Orlando Health President David Strong, City of Orlando Mayor Buddy Dyer and other community leaders, the crosses were loaded into a truck and escorted by the Orlando Police Department to Orange County’s Regional History Center.

Mayor Jacobs began the ceremony with 49 seconds of silence to honor the deceased victims.

“We are deeply honored to accept these 49 crosses into the permanent collection of Orange County’s History Center,” Mayor Jacobs said during her remarks. “By caring for these crosses, which were made with love and in memory of those who died, we are showing that we will never forget. These crosses will forever stand as silent but powerful reminders that love wins. We are showing the world that Central Florida is a community in which diversity is viewed as a fundamental strength – a source of unity and celebration, not division.”

The crosses were designed and built by artist Greg Zanis, who traveled 1,200 miles from his home in Illinois the week following the Pulse nightclub shooting to place the crosses just outside Orlando Regional Medical Center.

On each cross is the name of a victim and a red wooden heart. The crosses are covered with heartfelt messages from those who paid tribute to the victims.

“Sometimes the history and our story are difficult to tell, but this is an important part of Orange County’s history,” said Perkins. “The glowing tributes to the victims and the unbelievable outpouring of love from the community, the nation and the world are truly amazing. Our staff is honored to be a part of this collection and the preservation of these memorial items.”

The transfer and storage of the tribute crosses is part of the One Orlando Collection Initiative, which serves to preserve the history and properly care for the many thousands of tribute items placed in memory of the victims of the tragedy. Working through Orange County’s Regional History Center and in partnership with the City of Orlando, Orange County is collecting and preserving memorial and tribute items for the long-term memory of our community. The History Center will serve as the repository and caretaker for non-perishable physical items. Flowers and other organic materials were composted for use in gardens throughout the City of Orlando.

On July 18, History Center staff completed their Pulse Orlando memorial collection efforts at the Dr. Phillips Center for the Performing Arts’ Seneff Arts Plaza. All items were catalogued and photographed prior to their long-term preservation as part of the One Orlando Collection. A local uniformed Central Florida Boy Scouts of America troop performed the dignified removal of hundreds of American flags from the site, along with Puerto Rican and other official flags. The flags were properly retired by the American Legion.

The One Orlando Collection Initiative will be working collaboratively with all local, regional and impacted individuals, institutions, or agencies toward the goal of expanding our shared understanding of these defining events and their continuing legacies.

The History Center will also be collecting other items related to the event, including photographs, stories, social media items, artwork and more, so these memories will be available for future generations. To share a memory or story, please contact the Orange County History Center at oneorlandocollection@ocfl.net. For more information, visit www.ocfl.net/OneOrlandoCollection.