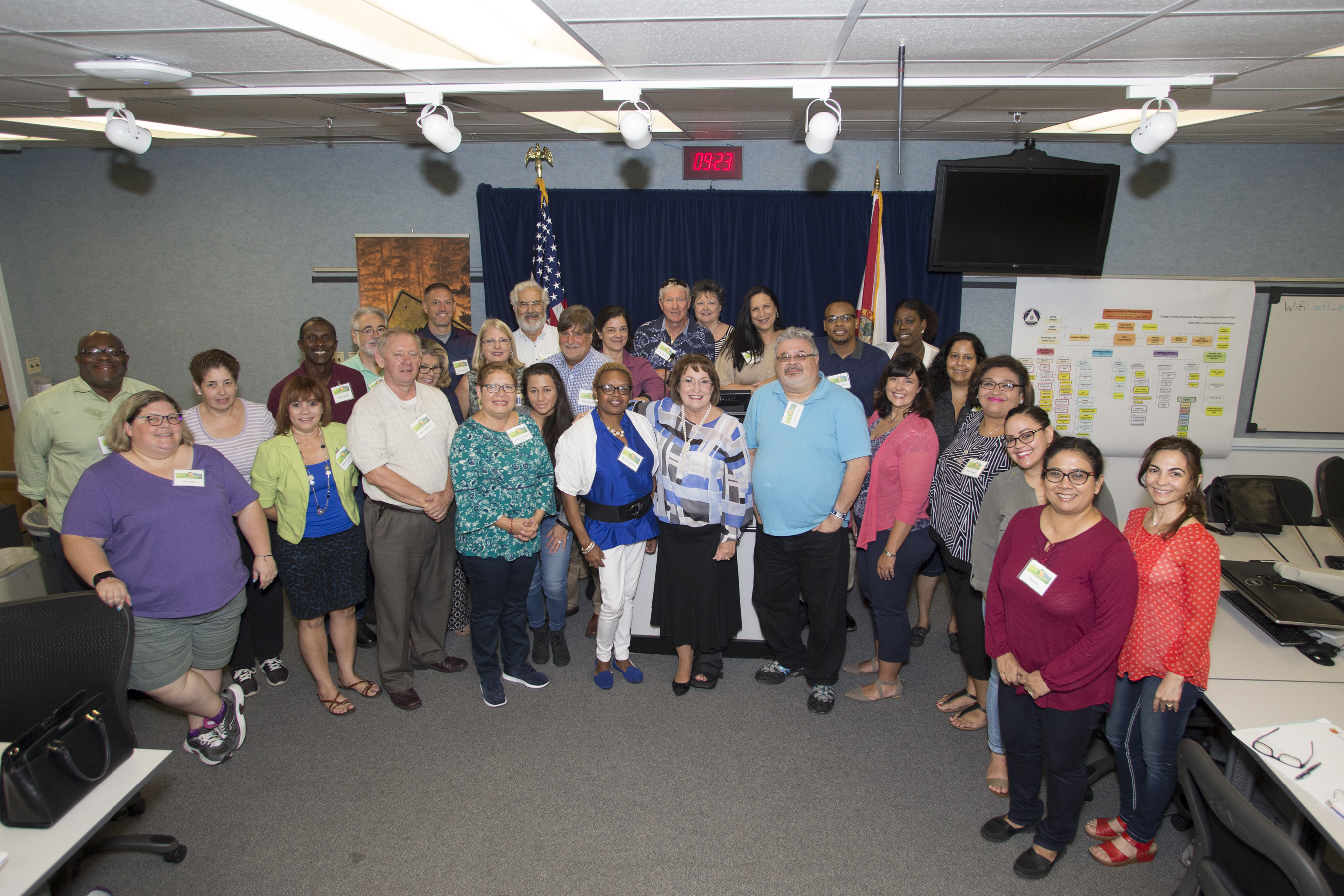 Orange County Mayor Teresa Jacobs kicked off the sixth annual Orange County Experience program with local residents on Aug. 25, 2017 at the County’s Fire Rescue Headquarters. The interactive series is designed to provide citizens a behind-the-scenes look at Orange County Government and how a local municipality works.

“From public works and garbage collection, to road repairs, pedestrian safety and transportation, Orange County Government is here to make a positive impact on our citizen’s quality of life,” Mayor Jacobs said during her welcome remarks. “During this exciting 12-week program, you will meet our very talented staff, and you will learn more about Orange County’s mission, our neighbors helping neighbors philosophy and how we strive to improve the lives of all Orange County residents.”

The 12-week program offers local residents the opportunity to learn more about the vital services that Orange County Government provides ranging from technology and infrastructure, to public safety, mosquito control, neighborhoods and health and family services. With 40 participants registered, the current class has the largest number of attendees since its inception in 2012.

Those present on the first day of the program described the series as valuable and educational.

“I had read about the Orange County Experience last year, saw all the cool tours the class went on, and wanted to learn more,” said multimedia producer Jen Vargas, who also serves on Orange County Government’s Social Media and Technology Workgroup. “Orange County is such a large place and, while I like to consider myself an informed resident, even I wasn’t aware of all the County’s services. I’ve learned so much already.”

During the Orange County Experience program, residents have the opportunity to meet Mayor Jacobs, Orange County staff and take tours of various Orange County facilities. Participants learn about the Orange County Convention Center, Fire Rescue, Parks and Recreation and other departments. Many program graduates continue to serve on County citizen advisory boards or serve as volunteers throughout Orange County.

Mayor Jacobs began this initiative after she created the Office of Public Engagement and Citizen Advocacy (OPECA) when she was first elected Mayor as a way to engage citizens and employees with the County. OPECA works to make government more accessible to its residents and provides the opportunity for citizens to become more involved.

The citizens of Orange County elected Mayor Jacobs to serve as Mayor in November 2010 and she was re-elected without opposition in 2014 for another four-year term. Before her election as Mayor, she served two terms as Orange County’s District 1 Commissioner from 2000 to 2008.

Since 1990, Orange County has operated as a “strong mayor” form of charter government — a reflection of the County’s urban character and driving economy. Under this structure, Mayor Teresa Jacobs serves as the CEO and Chair of the Board of County Commissioners. Members of the BCC are independently-elected from 6 districts, and serve in a legislative capacity.