It’s Honey for the Sweet Win

Like any good recipe, the search for a dish that represents Orlando is starting from the beginning: A signature ingredient has been decided – local honey – representing the diversity, sweetness and unique attributes of Central Florida.

A group of area chefs and food and beverage specialists met with Orange County Mayor Teresa Jacobs and Visit Orlando destination experts to consider exploring a signature dish for the region. The idea to focus on a culinary competition to showcase local honey grew from that initial challenge.

Beginning Oct. 2, diners will find a list of participating restaurants and their respective honey dish “candidates” on VisitOrlando.com/Dish. The dessert will be featured on each restaurant’s menu, and the public is encouraged to try each one and vote for their favorite throughout the campaign (Oct. 2 – Nov. 3). Votes will be cast and tabulated on VisitOrlando.com/Dish.

Visit Orlando will promote the competition with ongoing social media, and the public can join the conversation through the hashtag #MyOrlandoDish.

“A signature dish doesn’t happen overnight; ultimately it grows organically over time. This initiative is a first step in starting the conversation as to what dish the community thinks represents Orlando. In the process, we continue to expand people’s awareness of the rich and unique culinary offerings found throughout our region,” said Mayor Jacobs. “We are an incredibly diverse destination, which makes this both a challenge and an opportunity for everyone.”

Due to its temperate climate and agricultural origins, Central Florida has long had an abundance of local crops and plants that contribute to numerous flavors of honey, including gallberry, saw palmetto, blueberry, Brazilian pepper, and – of course – popular orange blossom from the region’s once-flourishing citrus groves. The state produced 17 million pounds of honey in 2016.

“Florida has the largest variety of honey – more than any other state in the U.S.,” said Orange Blossom Beekeepers Association’s communications director Beth Fox. “The diverse ecology in Central Florida, in particular, yields a wide variety of nice honey flavored by different wildflowers.”

“Our climate is conducive to nearly continual honey-making, as Central Florida has lots of flowers and botanicals blooming all year long for the bees,” said John Rife, the founder of local-sourced food hub the East End Market in Orlando (and a philanthropic beekeeper himself). “And it’s part of our history – growing up with orange trees in the back yard, watching bees pollinate.” It’s also a way to help fight the trend of declining honey bees nationwide, Rife notes.

Because of this mild climate, beekeepers from around the country also migrate to the state every winter to rebuild their colonies – trucking in about 280,000 colonies each year. The number of registered beekeepers in Florida has more than quadrupled in the past decade (4,500 in 2016), with about 500 new beekeepers registering each year, many in Central Florida, according to the University of Florida’s Institute of Food and Agricultural Sciences.

From a chef perspective, honey also was a natural choice agreed Chef Julie Petrakis, co-owner of several local restaurants, including award-winning The Ravenous Pig, and a participant on the task force. “We use local honey in so many ways; it’s so versatile, has many flavor components and is locally sourced and authentic to our region. It’s been an inspiration for many of our dishes, as it can be both sweet and savory.”

Destination executives will use the challenge to showcase Orlando’s culinary offerings. “The significant depth and breadth of Orlando’s dining experiences have grown and become a vital part of the destination for visitors,” said George Aguel, president and CEO of Visit Orlando. “This initiative celebrates the culinary talent in our region, unites the community through a friendly competition, and allows us to create some great ‘buzz’ about Orlando’s dining scene and chef artistry.”

The culinary competition kicks off this fall and is open to all Orlando restaurant chefs. Dishes can be submitted now through Oct. 1 on VisitOrlando.com/Dish, and public voting takes place Oct. 1 through Nov. 3. The public will determine the top candidates and a panel of national and local food experts will it narrow down to the final winner. Dish criteria are:

And the winners are…

In November, the field will be narrowed down to the Top 10, based on the desserts that received the most votes. The finalists will then re-create their dish for a panel of food expert judges, who will choose the winning dessert. The winner will be announced in December.

From internationally renowned chefs to home-grown venues, Orlando is a destination where the culinary possibilities are both fresh and seemingly endless. Theme parks restaurants and a diverse variety of award recognized independent restaurateurs across Orlando, bring fresh concepts and experiences to the table throughout Central Florida. Whether locally owned or part of expanding franchises, many of the destination’s newest restaurants mirror the national trends: American cuisine, farm-friendly menus and simple food with regional accents. Nationally, Orlando has emerged as a prominent dining destination, and continues to grow in both quantity and quality of flavors.

Visit Orlando is the official tourism association for the most visited destination in the United States, with representation in more than a dozen countries around the world. Visit Orlando, together with its 1,200 member organizations, represents the area’s leading industry. 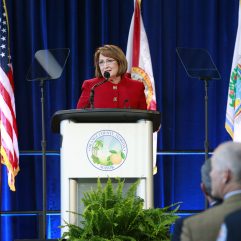 On April 7, Orange County Mayor Teresa Jacobs welcomed hundreds of citizens and community leaders to the 2017 State of the County address at... 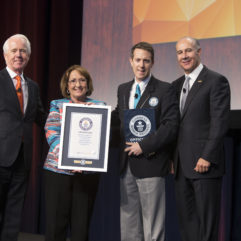 Orange County and Orlando Sets World Record and Thanks Visitors for making it No. 1 Destination in U.S.

Orlando took the concept of appreciating its visitors to unprecedented heights today as it achieved a GUINNESS WORLD RECORDS™ title, gathering thousands of hand-written...